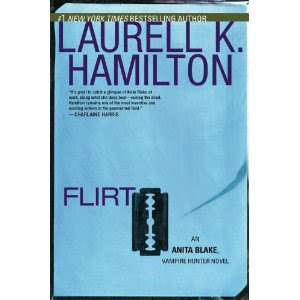 Flirt by Laurell. K. Hamilton
5 out of 5 stars

I have been a huge fan of Laurell K. Hamilton's books since I first found them. While I felt Hamilton lost ground with the last book, Skin Trade, this one takes things back to the writing and storyline that made me want to read her books in the first place.

I read the Hardcover version which held 192 pages. While I wish she would make all the books as long as Skin Trade and have all the meat in the books, that isn't always possible. But I can wish.

About halfway through the book, I realized where the title of the book comes in. There is flirting going on all the time. Especially in a restaurant scene where the waiter gets tongue tied and flirts with her and one of the men at the table with her.

At the end of the book there is a comic strip that one of Ms. Hamilton's friends did for her, where we find out that this restaurant scene actually happened to her and her friends in real life and that's where she got her inspiration from.

All in all, I really enjoyed this book much more than the last one, even if it wasn't as long as I would have liked it to be.
Posted by Mary Kirkland at 9:43 PM 2 comments