On Wednesday I walk outside and see this woman laying on the sidewalk. Yeah, that's a person laying there on the sidewalk in front of a door. The second to last door is what I assume a drug apartment where she goes all the time to I'm assuming to get her drugs. There's so much traffic to and from that apartment, most of us around here just assume they are dealing drugs out of it. She's so high she passed out right there on the ground. Unbelievable. No, I didn't call the cops because the only thing they'll do is make her get up and leave. She'd be back in a few minutes anyway. I've called before and that's all they do. Me and another neighbor called the manager who came and made her get up and leave.

I enlarged the picture so you can see there really is a person there. 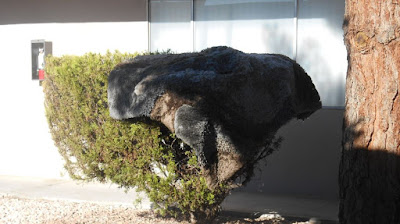 The neighbor directly across from me had this huge fur rug sitting out in the rocks and had a hose with running water running on it all night on Friday. I guess that's how she chose to clean it. Her neighbor was mad as hell because each one of us in these buildings has to pay a portion of the water bill each month. So her running the water outside all night will make all of their water bills increase this month. If it had been on my building, I would have shut the water off that night but he didn't want to. Then in the morning she had 3 other neighbors help her and her husband lift it up (it looked heavy as hell) and drape it across the big bush there. I wonder how long it will sit there before she decides it's clean and dry enough to bring back in. Maybe a bird will poop on it and they'll have to do it all over again.

Of course I'm sure they'll bring it back inside before tomorrow morning when the manager will be back walking the property. Oh and we have a new manager. I'm not sure if I told you all that last week and she's a dumbass. So far this month I've received 7 day eviction notice that was for another apartment but had my apartment number on it and an email telling me that I was delinquent for $20 which I was not. I called her and she said she sent out the notices by mistake. What? Like I said, dumbass. lol