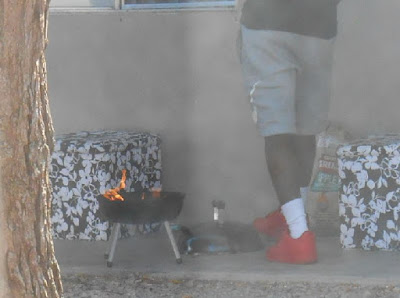 Last Saturday evening the guy across from me was bbqing and had another guy over. I wouldn't have thought anything about it if he hadn't had the bbq on the sidewalk/walkway directly under the overhang and mere inches from the wall and his two plastic seat cushions. I mean, the dumbfuckery is astounding right here! Anyone with half a brain knows to keep the bbq's out in the rocks away from the building and anything that can melt/catch fire. I had my curtains open watching this fool the entire time. Then once the fire had died down, I hear he and his friend loudly arguing, shouting about cocaine this and cocaine that...and someone broke a plate on the ground and slammed the door shut. Good grief.
---- 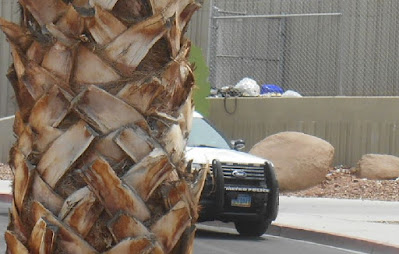 On Monday morning the police were on my street going down to the old guys apartment who's brother hit him in the face and broke his cheek bone a couple of weeks ago. They've been at that apartment a few times since then. Maybe the brother who got hit, took out an restraining order and when he spots him around he calls the police. I don't really know. The police car is hiding behind the palm tree because I took the picture from my bedroom window as usual. lol
---- 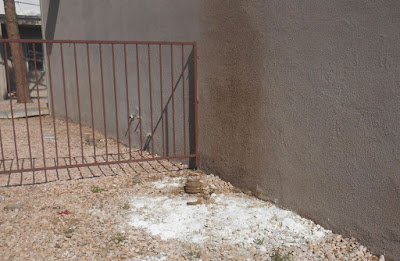 Well, ya'll it happened again. The overflow drain outside started overflowing and it got so bad that the raw sewage was squirting out of the pipe and onto the wall there that you see discolored. The plumber's came out and cleared the drain again and once again when I heard the pipes in the bathroom start squealing from the plumber's using the snake, I put down some paper towels and closed the toilet lid. Thankfully this time only the paper towels got wet and the water didn't splash all over the bathroom and onto the floor. A much easier cleanup. They really should let us know to close the toilet lid before they do that.

Afterwards, maintenance sprinkled some white powder all over the raw sewage that was on the ground and it's been that way all week. I guess they're just gonna wait for the next rain to wash it away. The fun never stops!
----
My neighbor came to my door Monday morning and asked me how much in rent I pay, so I told her and she's on the phone and starts yelling that everyone around her is paying xxx amount how come she's being charges $25 more a month since she just signed a new lease. She's standing at my door screaming into her phone at the apartment manager because they told her that she's being charged a monthly pet fee. She starts screaming into her phone that her dog is an Emotional Support Animal and they can't charge her anything for him.
They put her on hold and she starts yelling about how they aren't going to charge her more money for this 'bomb ass place with dog sh*t all over the ground"
Oh boy she was mad.
She spent some time walking up and down the walkway screaming at the manager on the phone.
The next day I asked her if she got it worked out and she's still mad because her rent is higher because she signed a new lease and the rent always increases with a new lease.
----
And for those of you wondering...I did indeed get my mail key finally.
So that's it for this week's Apartment Hell  Life! Be sure to come back next week for more.
Posted by Mary Kirkland at 12:00 AM 57 comments