I'll be updating this as I find stuff out.

I just wanted to update you all about things that are going on with me right now. My husband and our daughter are both in the hospital right now. My daughter had a severe asthma attack yesterday and I had to call 911 for her at 6am. She's doing better now but might have to stay there another night.

Then at 1pm yesterday I had to call 911 again, for my husband. He had right leg and arm weakness that got worst over a couple of days to where he couldn't walk yesterday. Then he had a seizure and they took him to the ER and did a CT SCAN. They found some spots on his brain so they think he might have a brain tumor. And then this morning he told me that they also found a spot on his lungs and they are going to do an MRI of his stomach because they saw lesions on his stomach. So right now we don't know what's going to happen, if they can treat it, or what all of the spots are. It's all just up in the air and I'm stressed out. Because of the Coronavirus they aren't allowing visitors so I can't even go see him.

So I wanted to let you all know that's what's going on. I'll still be around but I might be a little late in getting around to everyone's blog for a while.

Update: I talked to Ken this morning and they said he has lung cancer that traveled to his brain. They are going to run more tests before they talk treatment.

Update: They're still doing testing on Ken to see what all is wrong with him. But my daughter came home last night.

Review: Badger to the Bone by Shelley Laurenston 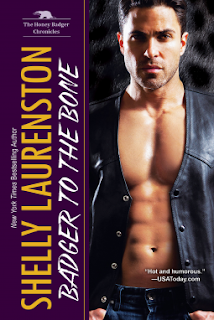 She’s the woman he’s been hired to kidnap. But ZeZé Vargas has other ideas . . . like getting them both out of this nightmare alive. Just one problem. She’s crazy. Certifiably. Because while he’s plotting their escape, the petite Asian beauty is plotting something much more deadly . . .

Max “Kill It Again” MacKilligan has no idea what one of her own is doing with all these criminal humans until she realizes that Zé has no idea who or what he is. Or exactly how much power he truly has.

But Max is more than happy to bring this handsome jaguar shifter into her world and show him everything he’s been missing out on. A move that might be the dumbest thing she’s ever done once she realizes how far her enemies will go to wipe her out. Too bad for them Zé is willing to do whatever it takes to keep her alive . . . and honey badgers are just so damn hard to kill!

Max is crazy and a honey badger shifter who is trained to kill. She's just about as lethal as you can get. So when she finds herself kidnapped, it's not really a problem for her to escape but she wants answers first.

Ze is one of Max's captors but when Max starts calling him a cat shifter, he just thinks she certifiable. Max is something different though and he's not sure just what kind of crazy she is.

Max saves Ze and brings him back to her home where her sisters and other shifters live. Then she tries to make Ze understand that he too is a shifter but it took a little time for him to finally believe her. Max says things that just made me laugh out loud, she can be so funny. But she's also lethal and doesn't seem to feel bad about hurting or killing someone. Most shifters don't seem to like humans and they tend not to mingle with other animal shifters. Each group of animal seems to keep to their own group.

Of course there are government agencies that want to use the shifters for their own resources and one of Max's sisters have told one such group to keep away from her and her sisters. So when a group comes and wants Max and her friends to work for them, her sister, Charlie is not happy about it and lets them know it. All I can say is, don't piss off Charlie. Seriously, don't piss her off.

Then there's one of Max's cousins who tends to come after her and wants her dead, just because. These sister's seriously have some messed up family. Max and her sister have family that hate them, Ze has family that lied to him and the government agencies just keep coming back to get them to work for them.

This book had so much butt kicking action, but it also made me laugh out loud so many times. It was a lot of fun to see what would unfold next, what new character would pop up with some kind of emergency or who would come around sniffing for Charlie's baked goods. This was such a fun book.

Disclosure: I was given an ARC of this book via NetGalley but all opinions and thoughts are my own.
Posted by Mary Kirkland at 12:00 AM 18 comments