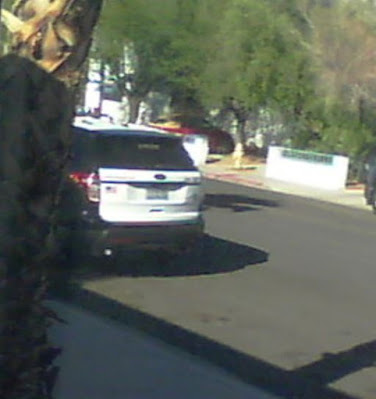 Monday afternoon I saw the police parked outside my building. They came into my courtyard and went to the apartment across from me. They didn't stay long and no one was arrested so I don't know what they were there for. 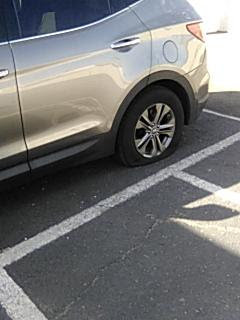 I heard my elderly neighbor yelling at somebody outside on Monday so I took Falcor outside so I would be nosy. After she was done yelling at drug dealer, she came over to me and told me that somebody that goes to drug dealer's apartment slashed four of her tires. She believes it was Beverly, a homeless woman that she had staying with her for a while but had to kick out because of all the problems and drugs that she was doing. But Beverly still goes down to drug dealer's apartment and she saw her earlier that day so she thinks that it was her that slashed all four of her tires. I only took pictures of two of the tires but all four have been slashed. 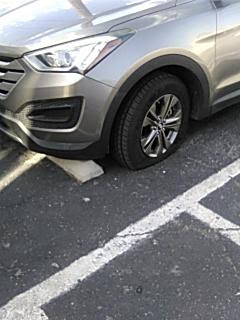 Her tires got slashed in a way that they can't be repaired so she's going to have to buy four new tires or used tires and she can't afford it because she's elderly and honest fixed income. So she's spitting mad, and was yelling at drug dealer telling him that she's going to start calling the cops every time she sees the druggies down at his apartment or anytime she sees Beverly down at his apartment she's going to call the police because she wants Beverly arrested even though she has no proof that she did it, she's the only one who's mad at her right now. I don't know if she'll actually call the police but I have my camera ready just in case.
---
Last month an elderly, deaf lady was mugged in the alley of my apartment complex by one of the druggies. She and her husband were so shook up that they moved out soon after and I don't blame them one bit. Apartments have been broken into, cars have been broken into and vandalized and people have been mugged. All so the addicts can get money or something to trade for more drugs. I have no doubt that things wouldn't be this bad if drug dealer was evicted or he and his wife spent more than a couple of months in jail for it.
--- 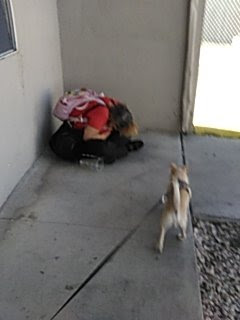 This is what residents here have to deal with when they step outside their doors. This woman was sleeping near drug dealers door waiting for him to open for business. Sometimes there are several druggies sleeping on the sidewalk that you have to walk past in order to walk your dog out front.
I would however like to clarify something. I post pictures like this of the homeless and addicts around my apartment complex only to show people what we residents have to put up with, for documentation of what is happening, not to make fun of them or make a spectacle of them. I bring this up because someone on Twitter told me that's what I was doing by posting pictures of the addicts. We are no longer friends because of it, which is fine. She has her views and I have mine. I'm the one having to deal with this everyday, she isn't. But I don't want anyone else getting the wrong idea about why I take pictures and post them.
This isn't something new for me. Both of my parents were drug addicts. My mom spent 6 months in prison for child endangerment and child neglect and my brother and I ended up in foster care for months because they chose drugs over us. So I know how they act, how they treat their families and what it's like to live with them. I will not apologize for posting pictures of what I'm seeing where I live.
---
The high this week was 99F/37C
The low this week was 71F/23C
So that's it for this week's Apartment Hell  Life! Be sure to come back next week for more.
Posted by Mary Kirkland at 12:00 AM 56 comments