The Difference Between Manga and Anime 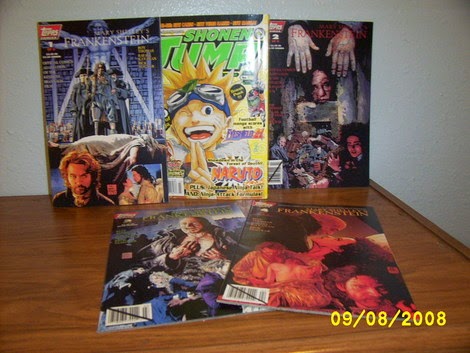 One of the biggest trends in the past few years has been Anime. So many cartoons you see on television these days are of this style. Recently I've seen these huge comic books as well. I wasn't sure what they were and started looking through one, I was told by the comic book store owner they are called Graphic Novels, also know as Manga.

Manga is just a Japanese word used  to say comics. In America it is a term used to cover all comic books and Graphic Novels that were made in Japan. Book length comics are very common to find here in the U.S and are often labeled Manga. Manga stories are known for having ongoing story lines as well as more than one volume. Their stories are often an existence unto themselves. They way they unfold and are told makes the characters seem real.

The Graphic novels as they are written in Japan, may have nudity, sex, and some obscenities. When we get them here, a lot of time they have been "Americanized", that is to say they have been cleaned up a bit. Now not all Manga has been cleaned of the sex and nudity. Go into any comic book store and you will find a plethora of comic books, Manga and Graphic novels with more nudity and sex in them than the Hustler magazine your dad had under his mattress.

Anime is a word used to describe Japanese animation. I'm sure you've seen Anime on T.V., maybe watched Pokemon or Naruto with your kids. Those are Anime. Hamtaro was one of my favorite Anime Cartoons to watch with my daughter. Yes, before you ask, it was about Hamsters. Imagine that.

So, you might be thinking this sounds interesting to me. I think I'll go find a Comic Book Store and take a look, maybe buy a few for my kid. Before you do, you should know there are a lot of Pornographic Manga Graphic Novels out there. So make sure you look through the Comic Book before giving to little jimmy, or he might come back asking you what 'That" is.

If you do start reading Manga or watching Anime, there are a whole slew of terms you may be bombarded with that you've never heard before. These are just a few and I hope they help you get started.

Cosplay- Refers to a person who dresses up like their favorite character. Sometimes you will see them at Anime Conventions.

Arigato- Means Thank you in Japanese.

Face Fault- Is an exaggeration of facial expressions, also sometimes accompanied with falling to the ground.

Fanfic- Refers to a work of Fiction written by a fan of Anime or Manga and based on a popular title.

Sensei- used to refer to a Professor or Teacher.

Sweat Drop- Refers to a large bead of sweat on the heads of an Anime Character. This is common in Anime and it is supposed to help show the character is exasperated.

OAV/OVA- This means Original Animation Video and Original Video Animation. Both terms used in Japan to describe animation that was released directly to video. It was not on television or in the theaters first before release to a video. OAV is not usually used anymore because it was sometimes associated with Original Adult Video, so they mostly use OVA now.

Harem Anime- Usually refers to a nerdy male character who after having no luck with women suddenly finds themselves with several women throwing themselves at him. Thus, he has a harem of woman. Sometimes the roles are reversed and Women will have a harem of men.

Fan service- Pictures or scenes made for the sole purpose of exciting or titillating the person watching. Things like boob shots, ass shots ect...Sometimes it also refers to large explosions or car crashes. Things that make you want to watch.

Otaku- Is the extremely negative word meaning someone who has no life and spends all their time playing video games, watching Anime, reading Manga, surfing the internet. Someone who devotes all their time to a hobby to the point of not leaving their house, thus not having a life.

Glomp- is used to describe a strong hug in an Anime scene.

These are just some of the terms used in Manga and Anime, I hope they have helped you learn a few things you didn't know before reading this article.