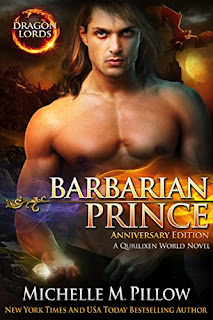 Book Description
Breaking up is hard to do...
Going undercover at a mass wedding as a bartered bride, Morrigan Blake has every intention of getting off the barbaric alien planet just as soon as the ceremony over. Or, more correctly, just as soon as she captures footage of the mysterious princes rumored to be in attendance.
After a euphoric night, Morrigan discovers her ride left without her and an alien dragon shifter is claiming she's his wife. It's not exactly the story this reporter had in mind. And to make matters worse, the all-to-seductive alpha male refuses to take no for an answer.
Being cursed by the gods was never so frustrating...
Prince Ualan is prepared to follow dragon shifter tradition and marry the woman revealed to him during the marriage festival. When the stubborn, yet achingly sexy, Morrigan refuses to accept their shared fate, it is all he can do to keep from acting like the barbarian she accuses him of being.
My Review
Morrigan decided to make a name for herself and uncover the Galaxy Brides Corporation scheme that they were restoring female virginity so the women could then be traded to the aliens as brides. Because if she were able to prove this and break the story she would make a name for herself in the reporter field.
Prince Ualan just wants a bride and he thinks he's found his mate at the marriage festival. But Morrigan refuses to believe what is happening to her after her ride leaves her stranded.
Morrigan goes undercover at the marriage festival to get the story she thinks will make a name for herself. But for Ualan this is very real and he's very confused by her actions when he picks her to come to his tent and be his wife. The men think the women read up on their customs and have come there ready to be picked as brides so Ualan is very confused when she doesn't understand what to do in the tent and then the next day doesn't realize that he now thinks of her as his bride.
Once back at his home, she does everything she can think of to make him not like her so he'll send her back to Earth. But it backfires in a big way and she finds herself in a pickle of a predicament. I found some of the things she did really funny and the fact that Ualan found some of the things she did funny, made it funnier. There are so many times that they just needed to communicate better in order to clear up the miscommunication between them and that was a little irritating to watch. But they really cared for each other and while I loved the fact that he's a dragon shifter, I thought that didn't play as big a part in this story as I would have liked. I really wanted to see more dragon action, more dragons flying around or something more to do with the dragons but it just wasn't there.
I loved the Queen and how she came to the new brides to give them advice and how helpful and caring she was. She seemed to know exactly what to say to them to help them with their new husband's.
At times I thought they were going to work thinks out only for some other problem that they didn't talk out to come between them again and they would have to start all over again. Both Morrigan and Ualan felt hurt and betrayed at times because they refused to talk about what was bothering them. If she is such a good reporter she should have done more research on their customs before she got there so she would know what she was getting herself into. But overall I really enjoyed this book and plan on reading more of this series.
I give this book 4 out of 5 stars.
Posted by Mary Kirkland at 12:00 AM 14 comments