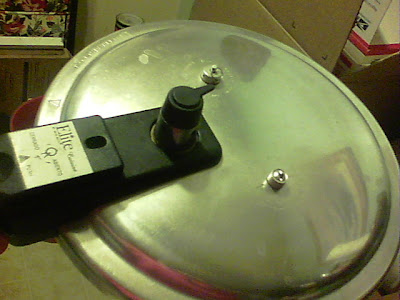 Pressure Cooker lid. It has a safety valve and emergency release valve. 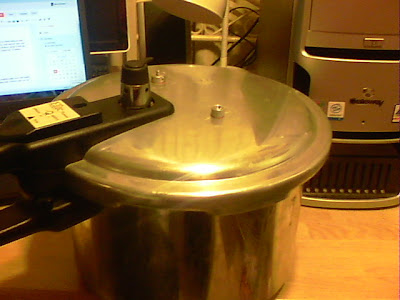 I bought a large pressure cooker so I can cook even really big roasts.

I bought a pressure cooker a while back because I watch Iron Chef America and see them using pressure cookers on that show all the time. I figured I could buy those tough, cheap, hard to cook and get done and still be able to chew it roasts-done and able to eat. I was right. I bought a couple of those cheap as hell and tough to chew when cooked chuck roasts and put those suckers in the pressure cooker for 45 minutes.

Cook on med/high for 45 minutes so that the pressure cooker steam valve is making a little noise and slightly swaying back and forth. Take off of burner and let sit for 15 minutes until safety valve releases and you can open the lid. I served mine over steamed rice.

I know some people are still scared to buy a pressure cooker because of the horror stories they've heard from their mothers and grandmothers. But these new pressure cookers are not going to blow up on you. They have several safety features built in and an emergency release valve. I love mine.
Posted by Mary Kirkland at 3:30 AM 6 comments