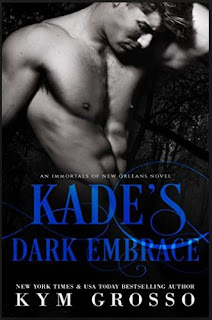 After a series of girls are ritualistically murdered on the cold streets of Philadelphia, seasoned detective, Sydney Willows, is forced to work with sexy, alpha vampire, Kade Issacson. While working the case, Sydney finds herself inexplicably drawn to Kade, fighting the passion she feels towards him. Kade, determined to solve the case and mete out justice, is captivated by the independent, fiery detective. As he attempts to protect her from a very real murderer, Kade grows concerned that the beautiful, but very human detective, could easily end up dead should she tangle with supernatural forces that are beyond her control.

The investigation leads them into a dark and dangerous world, deep in the heart of New Orleans, where together, they search for the perpetrators of the Voodoo killings. Sydney soon becomes the target of the killer and ends up fighting for her life and love in the Big Easy. If she makes it out alive, will she give into the intoxicating desire she feels for Kade?

There's nothing I like more than a hot vampire romance and this started out so good, which is why I'm glad I grabbed this book when I saw it was free on Amazon. Right from the very beginning Kade seems like the hot alpha vampire that would make even the coldest ice queen melt in a puddle at his feet.

Kade let the human police think he works for P-CAP (Paranormal City Alternative Police) and as luck would have it Sydney is a human police detective. Right before they had both been called in about a dead body they had both been in the same area when Kade got a look at her, not knowing who she was and almost took a bite out of her, or a small taste I should say. I really don't think that would have ended well for Kade. Sydney is no pushover and knows all about the paranormals, including the vampires.

They start off really rocky and argue who is lead on the investigation but after a day or so they start working together, all the while fighting the attraction they feel for one another. Lusting after each other during a murder investigation is just not right and they both know it.

I really liked the chemistry between these two and the secondary characters were just as interesting as the main characters. I'm really looking forward to reading some of their books and getting to know more about them.

The murder aspect brought in another dimension to this story because we get a little info about Kade's past and we see how much he comes to care for Sydney, which was really sweet. The danger that they face from the villain is really exciting because the things the villain is doing to the murder victims is down right awful. But it made it really necessary to find out who was doing it and stop them.

This was the first book in this series and I really liked it. If this book is any indication as to what the rest of the books will be like, then I'm really looking forward to reading more from this series. I started reading this right after breakfast and I could not put it down. It hooked me and kept me hooked even after the end because I knew there was a continuation to the story. It didn't end in a cliffhanger because the main storyline was resolved with no holes left open but the last page did show how the next book would continue with a new storyline. And now I'm off to buy book #2 because I need to know what happened.