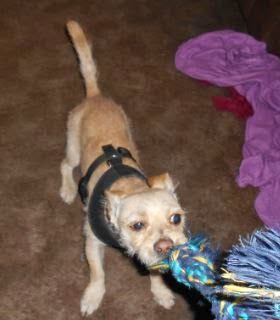 So today I thought I would share pictures of my animals. This is Falcor and me playing with one of his rope toys. This silly dog has a lot of energy and has taken to bringing us one of his toys and dropping it in our laps when he wants to play..which is all the time. 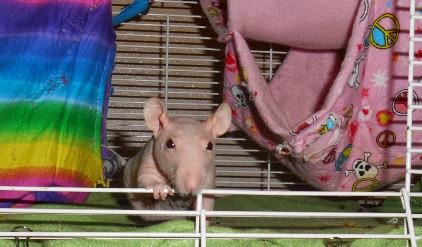 Flower is my hairless rat. She and Scribbles are both 2 years old and she still has so much energy. She is really funny to watch run and jump all over the couch. She just had her weekly ratty massage with a little extra virgin olive oil to keep her skin from drying out. I have to get the oil all over my hands and then grab her and quickly and gently rub my hands on her because she doesn't want to sit still long enough for me to do it. I think it's fun for both of us. 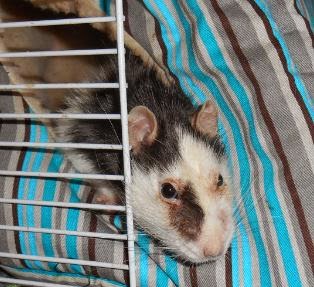 Scribbles is my 2 year old male rat and he's been a little under the weather lately. Last month he had an abscess on his nose and this month he has a small one on his shoulder. Thankfully they aren't getting too big and I can either lance them or let them drain and go away on their own. He's slowing down a little and showing his age but still comes running over to the front of the cage each morning when I clean the potty corner. He knows he'll get a treat a some mommy time. He used to want to come out and get held or play but now he just lays down and wants to be petted for a while. When he's done he'll turn his back to me and go back in his house. He comes out of his house several times a day and stares at me until I give him a treat or a petting. I know he wants a treat because he'll start sniffing all over my hands and push me away if I pet him. But if he wants to be petted he'll lay down and close his eyes once I start petting him. Yep, he has me trained well.