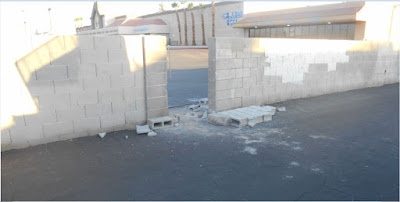 This week has been relatively quiet. This block wall is in my alley, I've showed it to you before. It separates my complex from the strip mall you can see through the wall on the other side. Over there is a K9 training center, Cal Ranch, liquor store, smoke shop and now a Mariana's Mexican supermarket.

The opening you see in this block wall has been there the entire 20 years we've been here and that's how people around here walk to these stores. It's the fastest route. Mariana's just opened last week and they hired someone to fill in this opening and the ones further down the wall, blocking access to the strip mall unless you walk all the way around the block. Everyone around here knew that someone would eventually knock down the wall they put up and 3 nights ago they did. I told Ken as soon as he told me they were out there filling in the wall that the people around here would not stand for this and a lot of others said the same thing because people were mad when this access way was closed off. I don't know if they'll try and fill this hole in the wall back in but if they do, it'll just get knocked down again.

On Thursday night my dog started barking because a couple of guys were running through our courtyard. Several minutes later the police helicopter was up shining their light on my street, Ken was looking out the bedroom window and they kept shining their bright light in our window but they left pretty quickly. Then a couple of hours later around 11pm, the police helicopter was shining their light in my courtyard and several police officers were standing in front of apartment #8. They stood out there for a couple of hours before Ken and I got too tired to wait and see what was going to happen. I don't know if they were waiting for a warrant or what. Friday morning I saw an envelope on their door. I still have no idea what that was about.