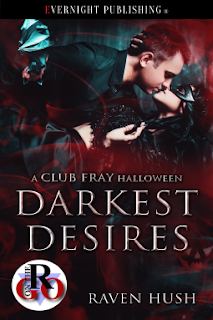 Book Description
Enota, a fruit bat shifter, mans the front desk at Fray for the club’s Halloween Trick-or-Freak party. By the time midnight rocks around, Enota is bored out of her mind rating costumes and drunks when the bouncers push a non-shifter in with a wink. Freaking out that they will undo all the work Rafe has done to protect the shifter community, Enota whisks the strange man away to the only remaining dungeon until she can work out how not to expose the community and get back to her job.
Mace recognizes Enota’s fear at the whipping post and proposes a game of trust and dare to pass their hours. A spanking bench demo turns hot and steamy, but Mace has more than one secret up his costumed sleeve ... a secret Enota will have to ask for before her time is up.
My Review
Enota is a fruit bat shifter and works at a bdsm club at the front desk. This night there's a big Halloween party going on in the club for the shifters so when a human man walks into the club, she freaks out for a second and wants to keep him safe until she can get him out unnoticed so she takes him into one of the rooms. But it's not just any room, it has all kinds of equipment that you would expect to find in a bdsm club and it's her least favorite room. In fact she tries to stay as far from this room as she can because of what happened to her in there in the past.
Enota has been searching for the right Dom for her and one of the Dom's at the club has offered to help her find someone for her but she doesn't think she's going to be able to find someone she can trust because of what happened to her in the past with a Dom that took things too far.
When Enota realizes that she just accidentally locked herself in the room with the human, Mace she's not sure what to think about her situation until he proposes a game to pass the time. Turns out that Mace makes her feel safe even though he's human.
Although this was a quick read, it was so much fun. it had just enough back story and just enough of a small scene between these two to make for a fun read.
I give this book 4 out of 5 stars.
Amazon
Posted by Mary Kirkland at 12:00 AM 25 comments