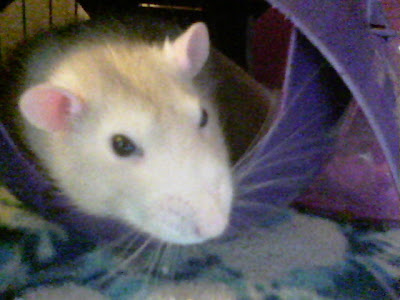 People who don't have rats don't realize that there are arguments about people who breed rats. These breeders usually call what they have, rattery's. Like a nursery, but for rats.

Now this is actually a controversial subject for a lot of rat owners because there are so many unwanted rats out there in pet shops, shelters and people who need to give away their 'oops litters'. Oops litters happen when a person who has no rat eduction let's their male and female rat get together and make babies either on purpose or by accident. The Doe gets pregnant and then they need to find homes for the up to 14 babies.

I had an oops litter of hamsters a long time ago when I bought a dwarf hamster from a pet shop, brought her home and a few days later I had 5 tiny pink babies in the cage with her. I never once thought about giving those babies away. Once they were born in my care, they were my responsibility and I took care of all of them.

I understand that a lot of people want to make sure they are adopting rats that have been raised in a good environment and not abused, because sometimes abused rats will have health and social problems. Rats that have been left in shelters may be old, in bad health and you have no idea who the parents are of the rat you are adopting, you have no way of telling if the rat is a product of incest or what their pedigree is like. If you want to breed the rat you adopt and don't know if there are any genetic abnormalities in his line, you should not breed them, which is why a lot of people adopt their rats from rattery's because they keep records of the rats genetic line and you'll know what breed, colors, coats and abnormalities are in their genetic line.

The thing is, I don't support ratteries at all. There are too many rats in shelters and being given away so that even if you don't want to support pet shop and I don't..that you could adopt a rat or rats from people who have oops litters or shelter pets who are looking for a nice home.

So anyone looking to adopt a rat..think twice about adopting from breeders or ratteries and instead adopt from your local shelter or rescue group. There's a rat waiting for you that needs a good home.
Posted by Mary Kirkland at 3:00 AM 4 comments