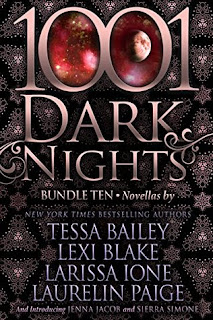 ROUGH RHYTHM: A Made In Jersey Novella by Tessa Bailey
Band manager James Brandon never expected to find the satisfaction he’d been chasing, let alone stumble upon it in some sleezy Hollywood meat market. Yet the girl’s quiet pride spoke to him from across the bar. But after losing the grip on his dark desires that one fateful night, James has spent the last four years atoning for letting her down. Rock band drummer Lita Regina has had enough of James’s guilt. She wants the explosive man she met that night in Hollywood. And she’ll stop at nothing to revive him.

DEVOTED: A Masters and Mercenaries Novella by Lexi Blake
Amy Slaten has devoted her life to Slaten Industries. After ousting her corrupt father and taking over the CEO role, she thought she could relax and enjoy taking her company to the next level. But an old business rivalry rears its ugly head. When Flynn Adler realizes the woman he’s falling for is none other than the CEO of the firm he needs to take down, he has to make a choice. Does he take care of the woman he’s falling in love with or the business he’s worked a lifetime to build?

Z: A Demonica Novella by Larissa Ione
Zhubaal has spent decades searching for the angel he loved and lost nearly a century ago. Not even her death can keep him from trying to find her. But as time passes, he’s losing hope… As an emim, Vex has always felt like a second-class citizen. But if she manages to secure a deal with the Grim Reaper she will have earned her place in the world. The only obstacle in the way of her plan is a sexy hardass called Z. Soon it becomes clear that they have a powerful connection rooted in the past…

FALLING UNDER YOU: A Fixed Trilogy Novella by Laurelin Paige
Norma Anders has always prided herself on her intelligence and determination. She climbed out of poverty, put herself through school and is now a chief financial advisor at Pierce Industries. She’s certainly a woman who won’t be topped. Not in business anyway. But she’s pretty sure she’d like to be topped in the bedroom. Unfortunately most men see independence and ambition in a woman and they run. Then the most unlikely candidate steps up. Boyd, her much-too-young and oh-so-hot assistant surprises her one night with bold suggestions and an authoritative demeanor he’s never shown her in the office.

CRAVING HIS COMMAND: A Doms of Genesis Novella by Jenna Jacob
Mercy O’Connor—known as Symoné at Club Genesis—craves the chance to experience true surrender. The only problem is, she’s set her sights on sexy, commanding Sir Justice, who studies her with his dissecting, arousing stare…but never offers to show her his ropes. If Kellan Graham let himself believe in love at first sight, Symoné would own his heart. After having his life ripped apart, he’s spent years inventing ways to resist simple lust, but each time this beautiful submissive turns her pleading eyes to him, she ignites a complicated conflagration of desire Kellan can’t fight.

My name is Greer Galloway, and I serve at the pleasure of the President of the United States. This is the story of an American Queen.

Every Dark Nights tale is breathtakingly sexy and magically romantic.

I've read most of these authors so when I saw that this was a freebie I grabbed it up really fast. I'm so glad I did because it was so good. I read fast but this took me a couple of days to finish because there was a lot of read here. So I'm gonna do a mini review of each story.

Rough Rhythm by Tessa Bailey
James was cruising the bar for another one night stand when he spots Lita and knows that she's the woman he wants to take home. Lita just wants a safe place to stay the night. She's been homeless for a few days and wants to feel safe for one night. He took her home and lost control of his dark desires for that night. For the next 4 years he managed the band that she was a drummer for and all she's wanted is for him to lose control of his dark desires once again. He feels bad about the desires he has but Lita enjoyed herself. Now if she can just break his tight control and make him give into her dark desires.

Devoted by Lexi Blake
Amy and Flynn meet at the local BDSM club but Flynn knew who she was. Her company and his company are at odds and so are their families. His people are telling him that she is sending spies to his company to find out information but the more he gets to know her the more he has doubts that she is behind any of it. As their D/s bond grows so do the questions and suspicion. Sooner or later he'll have to come clean and tell her who he really is and all hell will break when she finds out she's been lied to. But there are a couple of great twists towards the end of this one so I really like how it ended.

Z: A Demonica Novella by Larissa Ione
Zhubaal has been the Grim Reapers second in command for many years. He's been searching for Laura, his lost love. Her soul has been reborn into another and he wants to find her and he figures working for the Grim Reaper will help him find her. In walks Vex who wants to get rid of the souls that have attached themselves to her, but as soon as Z touches her he can sense Laura's soul inside Vex. It's usually easy to give the souls that attach themselves to her but this time a very strong demon is inside her and this one doesn't want to leave. It was fun watching Vex and Z get to know one another and realize where Laura's soul really was.

FALLING UNDER YOU: A Fixed Trilogy Novella by Laurelin Paige
Norma has the hots for her boss but he doesn't feel the same way. When she makes a pass at her boss and he sends her away, it's her assistant Boyd that finds her and asks her what's wrong. After talking with him, she suddenly see's him in a new light. This was a fun novella with light bondage and a D/s relationship.

CRAVING HIS COMMAND: A Doms of Genesis Novella by Jenna Jacob
Mercy brings charges against the Master that beat her even after she screamed her safe word. After court, she finds herself face to face with her very angry ex Dom who is out for revenge. She runs from him and ends up running right into the Dom at her new BDSM club that she's been watching. He helps her when the ex keeps threatening her and keeps her safe while they try to get enough evidence against him to arrest him. I really liked how these two took their time getting to know one another but he kept something important from her and I didn't like that.

AMERICAN QUEEN by Sierra Simone
I wanted to like this one but it just wasn't as good as the others in this collection. Ash was an ass. He was pushy, a little self absorbed and he was the President of the United States. Some of the things he did were just hurtful and he expected others to just accept it. He was an ass. Embry just made me sad. He just took what other dished out to him like he didn't deserve more. And then there was Greer, who by the way is our heroine. Not that you can tell by that name though. Greer for a female? That was irritating but she was irritating, naive and much too agreeable. The only character in this story that I liked was Merlin. But he was a bit creepy in a "I can see the future" sort of way. I read the whole story and jut when I thought it was going to end with a happy ending...I get a cliffhanger! A cliffhanger. My biggest pet peeve when it comes to books. My biggest irritation when it comes to books. The dreaded cliffhanger.

I liked most of these stories and think that this was definitely a fun read for the most part. I will say that if you get this bundle, just skip that last story. It's the only one of the bundle that I can't recommend.

Have you read this book? did you like all of the stories? I would love to hear what others thought.