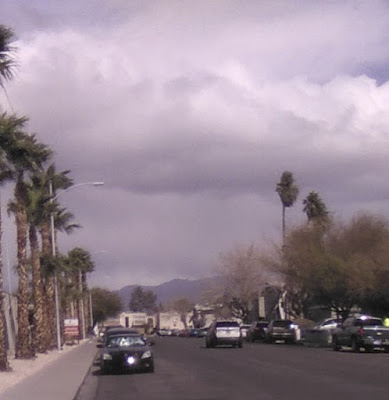 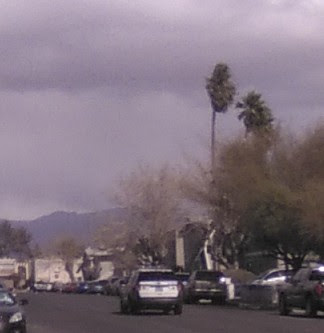 I enlarged the picture a little bit. They were driving up and down my street for a few minutes and stopping anyone from walking to the end of the street where the other police car was. I think something was going on at the apartment complex at the end of the street but I couldn't see what. It wasn't at my complex this time but they were patrolling my street quite a lot for a few hours after this that day.
----
Last Saturday (I forgot to add this to last week's post)  my grandson and I heard gunshots. A little while later I was outside taking Falcor for a walk and watched 3 cop cars pull up at the end of the street, where the next apartment complex down from mine is. It was at night and my phone camera doesn't take pictures at night but the police were in the same place as the first pictures I added up top.
--- 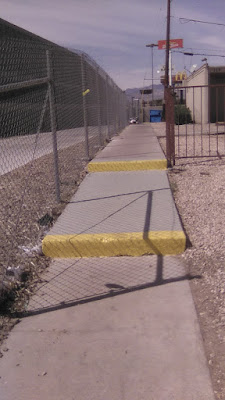 As I'm coming back into my courtyard after walking Falcor, I spotted something on the walkway. 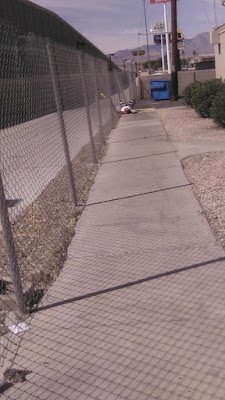 As I got closer I realized it was the guy I saw at drug dealer's apartment earlier. 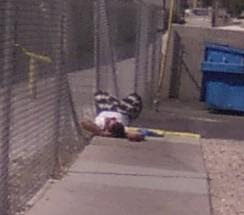 After visiting drug dealer's apartment, he passed out on the walkway in my courtyard. He's not homeless, he has an apartment across the street. I guess he was too high to walk back home.
---
Some guy I didn't know walked up to me on Wednesday and asked me if I was Mary Kirkland while I was outside with Falcor. I said yeah and this was the conversation.
Him: I used to live around here and someone has been getting my checks and cashing them.
Me: Well, I haven't received anyone else's mail.
Him: You live in #3 right?
Me: How did you know my name and apartment number?
Him: The mailman told me to talk to you that you might have got my mail but you're in 3 and I was in 5.
Me: 5 has been occupied for a few years and I don't remember you ever living in this courtyard.
Him: You be living by yourself?
Me: No, I'm married.
Him: You ain't gotta lie but I get it. You got a cigarette?
Me: No, I don't smoke.
Him: I'm gonna talk to #5.
I watched him walk past #5 and go straight to drug dealer's apartment.
Then a few hours later my daughter was sitting outside in one of our chairs and this idiot comes up to her trying to flirt with her and asks her for a cigarette. She said no and ignored him and kept scrolling on her phone and he walked away.
He's never lived here. I don't know what kind of scam he was trying to pull but I tell you what, I was mad at the mailman giving some strange guy my full name and apartment number. That's ridiculous. My daughter told her friend that some guy was flirting with me and he said, "Well, your mama still got IT."
If 'IT' is a creepy guy attractor, I don't want it.
---
The high this week was 81F/27C
The low this week was 48F/8C
So that's it for this week's Apartment Hell  Life! Be sure to come back next week for more.
Posted by Mary Kirkland at 12:00 AM 49 comments