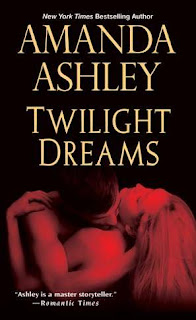 Holly Parrish has never met anyone like Micah Ravenwood: his dark eyes, his movie-star smile, the indefinable way he looks at her. Even when she thought he was no more than another client for her investment firm, her lust overpowered her logic.

But she never expected this attraction to whisk her from her busy southern California life to a silent and eerie ghost town in Wyoming. Only vampires call the deserted place home—and one of them is Micah. He says he’s brought her to Morgan Creek for her safety, that vicious creatures are hunting her. But how can Holly trust him? One look and she can see the need barely restrained behind Micah’s polite words. The heat of his kiss, the pleasure of his touch—none of it can tell her whether he wants her as his lover—or his prey . . .

As you know by now I love a good vampire story and I've loved Amanda Ashley for years. She really knows how to write an awesome vampire romance. This is the sequel to As Twilight Falls, and you can read my review of that book here. Here's a spoiler for you...I liked that one as much as I liked this one.

Micah is a vampire but not a very old one. About a year ago he lost his girlfriend. He had wanted to turn her into a vampire like himself but she was old and didn't want to be a vampire, so he let her die of natural causes even though it killed him inside. About a year after her passing Micah meets Holly and asks her out.

Holly is out to meet a potential client when she runs into Micah thinking he is the potential client but he's not. It was a fun meeting and I love it when a story can make me smile or illicit some emotion from me.

They meet a couple of times for dinner and movies ect... then something happens so that a female vampire hell bent on revenge is out to get Micah's friend. Being a vampire she can smell his friend's scent on him and follows Micah. When Micah feels like he's in danger and therefore Holly is in danger, he acts but the action he takes scares Holly and Micah has to tell her the truth about who and what he is.

The female vampire would be easy to kill but she has a body guard who is human but maybe something else as well. They just don't seem to know exactly what this body guard of hers is. Is he a Djinn, ogre, fairy or maybe a troll? They have no clue but he's strong and can walk over threshold's that vampires cannot and that makes him dangerous to vampires during the day when they sleep and are vulnerable.

The romance between Holly and Micah is so sweet. Sure, she's scared and a bit uncertain about the vampires around her that keep telling her she has nothing to be scared of and she can't deny her attraction to Micah. She still feels like it all happened too fast and she needs to take some time to herself to come to terms with it all and figure out if a relationship between them can really work. Micah is patient and gives her space and time.

This was a great story, one that I read in one sitting. It kept me wanting more and it was really good to see some of the characters from the previous book because I really liked them. If you like vampire romance with a little action and a sweet romance, then give this one a try. While this can be read as a stand alone book, it will make more sense and you'll understand the characters better if you read the previous book, As Twilight Falls. If you'd like to read this one, you can find it here.

I received this book free from NetGalley.