This week I thought I'd share what could happen when you try to help a neighbor.

A few years ago I saw and heard the couple directly across from me were fighting and the guy was hitting his pregnant girlfriend and she was yelling for help, so I called the police.

The police came out, saw her bruises and talked to Ken and I and asked if we'd sign voluntary statements, we did. I didn't realize at the time when you do that, they can then subpoena you as a witness, which they did. He was arrested and said he didn't do anything so there was a trial in which we were called to testify. This guys father who was a security guard somewhere came to our apartment a week before we were to testify and said he was a cop and told us that we didn't have to testify even though we were subpoenaed if we didn't want to. He essentially lied about being a cop and tried to get us not to testify. We could have brought charges against him for intimidation but after his son got a 3 month jail sentence we decided not to pursue it.

That was also the last time we have gotten involved in anything with the neighbors around here. 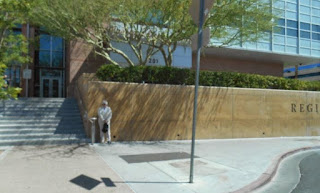 You aren't allowed to take pictures inside the courtroom of course but I took this picture of the front of the courthouse. 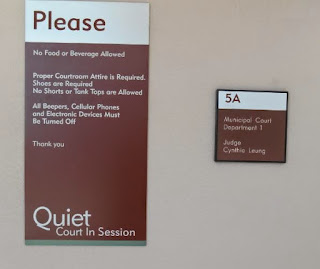 And pictures of the signs that were on the wall next to the doors to the courtroom we were in that day. It took 6 hours sitting in the court room for our case to be called and for the trial to be over. I've never testified in court before so it was an interesting experience. But it was all for nothing since 3 months later he was right back in the apartment with the girlfriend.  They moved out soon after.

So last week was interesting...

The maintenance man told us last week that he was called by the big boss of the company and was told to go into the office and screw shut the door that leads into the manager's apartment so she can't get into the office from her apartment anymore. The last time that happened the manager had been fired and had 30 days to move out.

No one was in the office at all last week so it sure looks like our apartment manager was fired. LOL

We had a couple of people tell us that 2 nights prior to the maintenance man being called to screw the door shut,  the manager was in the office courtyard in front of her apartment and she was yelling and screaming at someone. There was a big argument and no one has seen her since.

I've actually lost count but in the 20 years we've been here I think we've gone through 11 apartment managers.