Review: Wolf At The Door by N.J. Walters 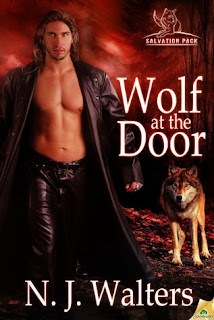 When this wolf comes knocking, there’s no turning him away

When Gwendolyn Jones inherits a Tennessee cabin from a great aunt she never knew, she quits her job and follows her dream to write full time. Meeting a stranger in a local cemetery isn’t a risk she normally takes, but she needs the information on his flash drive for an article she’s writing on werewolves. Later that night, when two honest-to-God werewolves come knocking on her cabin door, they’re definitely not Photoshopped.

Jacque LaForge is on a mission to retrieve a flash drive before it endangers his pack. He never thought he’d find a mate, but the chemistry between him and Gwen is unmistakably off the charts. Now to convince her he’s only trying to protect her from his vengeful former pack—led by his own father.

Gwen’s first instinct to flee only gets her a smashed car and a concussion. She wakes up in a dangerous new world she never thought existed—and in the arms of the one man who stands between her and certain death.

Warning: Contains a sexy werewolf and his small pack of friends, a paranormal writer who really didn’t believe such things existed—until now—and a completely dysfunctional family who are out to kill them both.

Gwen has been interviewing people for the paranormal type articles she's been writing. So when someone asks to meet her in a cemetery and tells her he has proof that werewolves exist, she reluctantly meets him and gets handed a flash drive. Unfortunately the werewolves can't allow her to keep the flash drive and that's when interesting things start happening.

Louis and Jacque LaForge are brothers and werewolves. Jacque is the alpha of the pack that split off from their father's pack and he's been keeping their secret from the humans. But now he and his brother must get a flash drive that was given to a human female that proves werewolves really do exist.

From the very start these two brothers did things wrong and they scared Gwen to death in the process. If they had snuck into her house and  stolen the flash drive from her, things would have been so much simpler. Instead they confronted her, scared her, caused her to wreck her car and then kidnapped her. If that wasn't enough for them to handle it turns out that Jacque realizes that she is his mate and also a possible mate for his brother Louis, which makes things really awkward for a while.

Things are going pretty good until their evil father comes with a bunch of minions from his own pack to try and kill Gwen because she's human and their father is just plain mean as hell, which is one of the reasons they split from his pack.

This is the first book I've read from this author but it won't be the last.