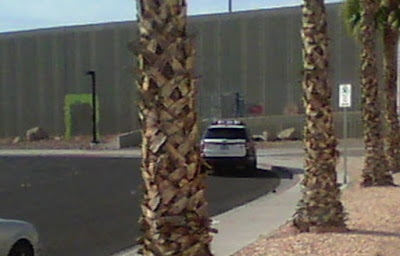 I saw the police outside when I was walking Falcor. They were on the other side of the fence right in front of the police car where some of the drug addicts were sitting. I figured they would be arrested since that's where they have been sitting smoking their drugs but the police just made them get up and leave.
--- 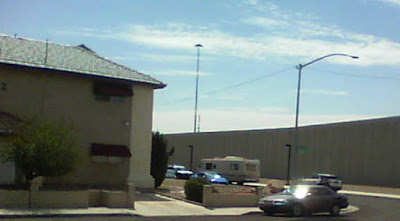 It's not really clear but there's a police car in front of the RV and one in back of the RV. They were out there for about 30 minutes talking to the guy in the RV again. I actually talked to him this week when I walked past his RV while walking Falcor one night. I asked him why the police kept hassling him and he said they didn't want him parked there and they keep wanting to see his registration, insurance and ID. He said he's showed it to 6 different police officers so far but he doesn't think they talk to each other so he has to keep telling them and showing them the same info every time they come by. The day after I took this picture, the man in the RV had moved on.
So I looked up my state's law about parking an RV on a residential street. Here's what the law says.
"Can I park my RV on the street in Las Vegas?
Can you park an RV on the street in Las Vegas? According to Las Vegas code enforcement, living or camping in an RV outside of an RV park is not allowed. Clark County civil codes state that an RV may be parked on the street for up to 72 hours, presumably only if it's unoccupied."
So that's why they kept hassling him.
--- 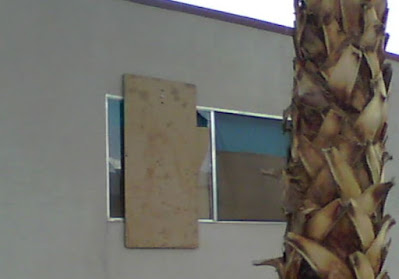 This is the busted window in drug dealer's bedroom. It got even more busted the night we had all the rain and they nailed a board to it, probably trying to keep the rain water from getting inside the window. I seriously doubt that worked because the wind was crazy and even my closed bedroom window was leaking. The next day this window had been fixed and a new window was put in.
---
Tuesday night I was outside with Falcor at 9pm in my courtyard and the lady across from me opened her door and all she was wearing was a bra and underwear. So instead of shutting her door or putting some clothes on, she shuts the light off and stands in her doorway staring at me.  I could see her because her undies were white. Lol wtf
And my next door neighbor told me that the new move in right next to this woman let her kids come outside and pee on the tree in the courtyard. They started out seeming normal too. Dang.
--- 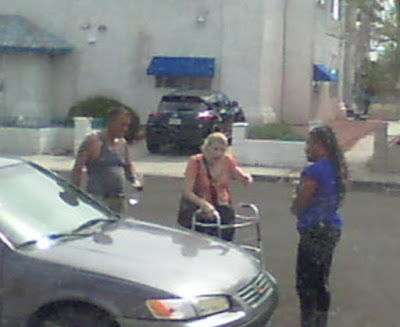 Drug Dealer's wife is back. That's her in the middle with the walker. I bet you didn't imagine a little, old, frail looking lady, eh? Nothing has changed, the druggies are still coming and going from her apartment. But some good news, the dogs are back and they look fine.
--- 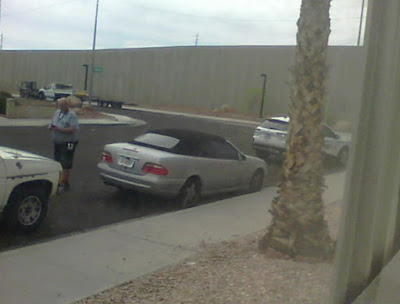 On Thursday I noticed Parking Enforcement taking pictures of a few cars, the license plates and putting the license plate numbers into his hand held device. He put notices on some of the cars and my neighbor told me that they were $75 tickets for not being registered. 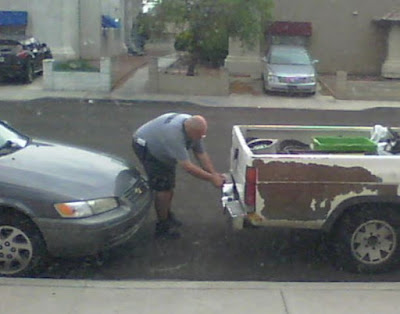 He was taking a picture of a license plate here. This truck actually had two tickets on it. 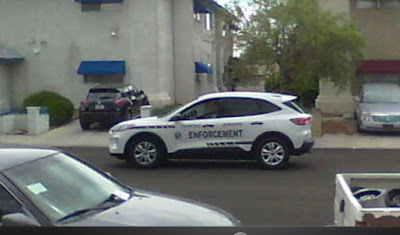 Then I got a picture of him leaving.
----
On Wednesday my neighbor (Married guys wife) knocked on my door and said,  someone told me you suffer from depression. 😲
Me: Yeah,  I do. *I actually thought she was going to ask for an antidepressant*
Her: I did too, until I found jesus, now I'm not depressed anymore.
Me: In my head I'm thinking,  Oh no. 🙀
Me: Oh,  I'm not religious.
Her: Just try it. Go on YouTube and watch some Sunday church services. It will help.
Me: I appreciate that but I'm Agnostic. And I'm doing alright.
Her: Well ok, if you change your mind you can come talk to me.
I know she's been hanging out with the only neighbor who knows I suffer from depression. Someone has been talking about me. 🙀
Maybe instead of preaching to me about jesus, she and her husband should lay off the cocaine and clean out their apartment. They are both hoarders and can barely open up their door to get in and out.  Maybe you need to ask jesus for a little more help. 🆘
I can still barely believe that this woman who I've only ever said Hi too, had the balls to knock on my door and tell me I need jesus.
---
And to close things out for this week I thought I would share a video my daughter took at the bus stop on her way to work. This is the same woman from my neighborhood who screams walking up and down the sidewalk. While she probably suffers from mental illness she also takes drugs so I'm sure that isn't helping.
The high this week was 103F/39C
The low this week was 81F/27C
So that's it for this week's Apartment Hell  Life! Be sure to come back next week for more.
Posted by Mary Kirkland at 12:00 AM 56 comments