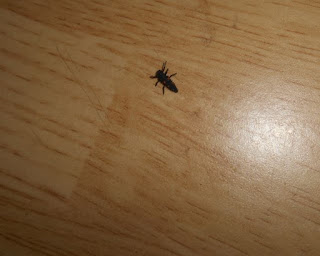 So it's bug day again. For some odd reason I like to take a few pictures of the weird bugs I find in my apartment before I take them outside so I can show them off here. I've seen these weird looking creatures that seem like they just emerged from the ninth circle of hell, for the past few years when it warms up. I had no idea what they were, all I knew is that they were unlike anything I've ever seen. So I took a picture of it. lol

I finally found a picture of them after searching Google for black and red bugs. It turns out they aren't demons from the pits of hell after all, they're just baby lady bugs, or as the science type websites like to call them, Lady Bird Larvae or Lady Beetle Larvae. Think of butterflies and how they are worms first, they form a cocoon and then emerge as butterflies. Same thing with these things. This is their 'worm' stage. lol 🐛🐛 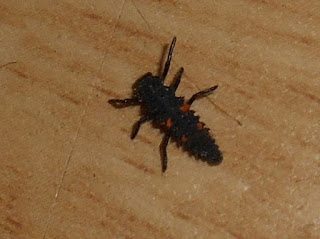 I enlarged the photo so you could see more detail. Now do you see why I thought these things were some sort of evil minions? 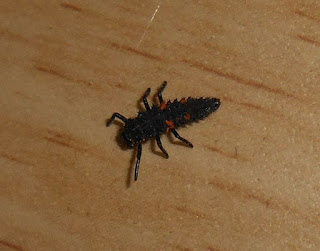 In this picture you can make out some of the red spots on it and even some of the little hairs on it. Now that I know what they are, I'm not scared to pick them up and take them outside. So when I saw this one on my kitchen floor, I took him or her (Are all lady bugs, ladies? I dunno.) outside after getting a few pictures.

Would you have known what this was if you saw it?

If you want to know more about Lady Beetle Larvae, this is the website I found on them.