Last month I heard a series of loud popping noises behind me in the kitchen and then right afterwards I smelled a burnt odor. You better believe that freaked me out. Ken was outside but came back home soon after and I told him what I heard. He checked the electrical outlet we had problems with and it was fine and then he checked the hot water heater and sure enough he found a burnt wire, a leaking pipe going to our hot water heater and a burnt label on the hot water heater where the wire had been touching the tank and burned the label and the tank. He flipped off the breakers to the kitchen and pulled the wire away from the tank and told maintenance what he needed to fix the wires. But the manager wanted an electrician the company hired to come take a look at it and fix the leak and wires even though Ken is a maintenance man and even worked at this apartment complex for a few years after we first moved in here. But it got fixed and that's what I wanted. 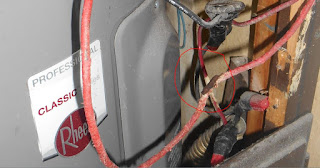 I circled in red where the wire got burned. Ken moved this wire away from the side of the tank where it had burned into the yellow label. 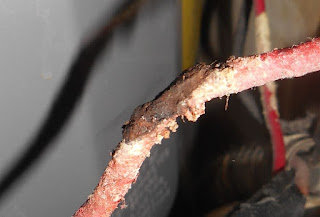 It got burned pretty bad and had to be replaced. 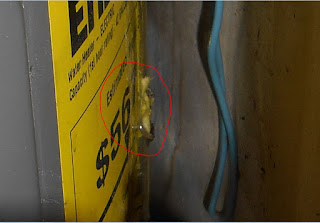 I circled in red where the wire burned the yellow label. You can't really see it because it's far inside the cabinet and on the side where I couldn't get a good shot but you get the idea.

After being in this apartment for 20 years there are going to be things that stop working and need replacing. Thankfully Ken is knowledgeable enough about this kind of stuff that he knew what to do to stop it from starting a fire. But it sure scared me.