Review: Bunny and the Bear by Eve Langlais 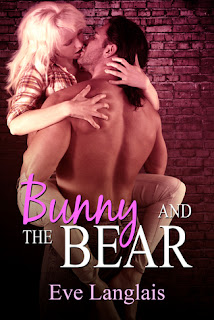 Warning: A sense of humor is required for this tongue in cheek, paranormal romance. It contains coarse language and explicit sexual situation meant for open minded adults. Please note, that while no bunnies were permanently harmed in the making of this story, the prognosis isn't so good for the pie.

What's a poor bear to do when all he wants is some sweet, bunny pie?

Bears and bunnies aren't supposed to mix, or that's what Chase keeps telling himself when his bouncy new neighbor won't stay out of his business--and his mind. However, the more he gets to know his overly perky neighbor, the more he craves her, a desire worse than his addiction to honey and pie.

Miranda's on a mission for the Furry United Coalition, and it involves secretly guarding one grumpy ol' bear. Staying focused on the job isn't easy when all she can think about is turning his frown upside down, a task made harder when she gets a glimpse of his passion. When she hears about his theory on woodland creatures and predators not mixing, she thinks all is lost, but she didn't count on a bear's curious nature--and possessive need.

When an evil force abducts Chase, Miranda unleashes her bunny in order to save him, but the revelation of her shifter side puts her in danger. Is one ornery bear enough to save her from a mad scientist? And if he does, can a bear forget her woodland creature status long enough to love her and make her his mate?

Miranda works for Furry United Coalition or FUC for short and right now some bad guy is kidnapping wealthy men. She's been assigned to keep an eye on Chase and make sure that if someone does try to kidnap him, that they catch the culprit in the act and stop it from happening again. The only problem is, Chase is a big grumpy bear shifter and even though Miranda is a nice, hot female...she's also a bunny shifter and Chase doesn't think that bears and bunny's should mix things up together is a relationship sort of manner.

Things don't always work out the way you think you want them to. Although Chase finds Miranda cute, she's a bunny and her bubbly personality rubs his grumpy bear personality the wrong way. When she moves into his apartment building and then she bumps into him at lunch, all he wants to do is get away from her, but then why can't he stop thinking about her when they are apart?

This book was hilarious. The sexual innuendo, one liners and play on words came so fast that I found myself laughing all the time. Not to mention that Miranda has a trick up her sleeve that makes her very good at her job. While it was hilarious, it was also a nice surprise that I never saw coming.

While we never did find out exactly who the bad guy was in this story, it felt less like a cliffhanger and more like and the bad guy is stalking his way into the next book since all the other loose ends were cleared up by the end of the book.