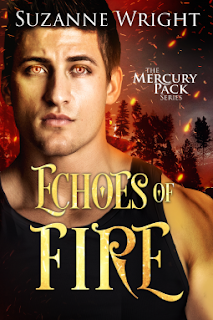 They may not be made for each other, but animal instincts are impossible to ignore.

Madisyn Drake is a rare breed of cat shifter…a loner, unpredictably wild, and emotionally distant. A recent betrayal has left her ready to sharpen her claws on the next man she sees…until a prowling wolf with steel-gray eyes and a brooding dark edge challenges her distrust. No matter how fully he satisfies her touch-hunger, Madisyn’s not ready to open up again, even if it is oh so gratifying.

Bracken Slater has earned his reputation as an indomitable predator. Once broken by grief and guilt, he is feeling alive again, thanks to the heady scent of this independent feline. Madisyn isn’t interested in joining an unfamiliar pack, so convincing her that they’re meant for each other is going to take more than branding her beautiful neck. But when threats from both their pasts take shape, their unexpected destiny may be the only thing that can save them.

This is book 4 in the Mercury Pack series and even though this can be read as a standalone, it would be better to read in order so you know all the characters.

Madisyn and Bracken meet after Madisyn beat the crap out of three shfters in the restroom. Madisyn is a Pallas Cat shifter, which are small, furry, cute but mean as hell... cats. She has an attitude and can definitely back up anything that comes out of her mouth. The owner of the club wants to know what started the fight but everyone is keeping quiet about it.

Bracken is called to come get Madisyn. He's known for being tough ever since his family was killed but he likes Madisyn. She also likes him but she doesn't let on since she has no idea how he feels. But when Bracken realizes that she's suffering from touch hunger, he gives her what she needs but in doing so he bites her and leaves his mark. He tells her that if she needs the touch of another to come to him, no other. His wolf is possessive but she doesn't understand why right away. Bracken's pack is great and for the most part they were all very welcoming to Madisyn and very happy for Bracken.

When danger comes calling from another pack, Bracken does what he can to make sure Madisyn is safe. His pack and the people from the shelter she works at even get involved because they can't let the alpha of the pack get what he wants. I really liked how everyone came together to help Madisyn even though she's completely able to take care of herself. She's one kick ass little cat.

I loved these two. They're both hurting for different reasons and when they come together, you can just tell they are made for one another and they help each other heal. I highly recommend this series.

Disclosure: I was sent this ebook free from NetGalley in exchange for an honest review but all opinions are my own.