Finding An Adopted Loved One 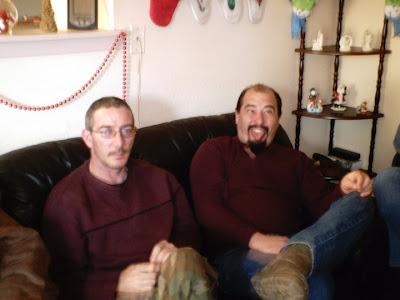 These two brothers and I have the same mother. The one on the right making the face is the older brother who had been adopted and I found a few years ago.

I found out I had another older brother when I was 12 years old. My mom was talking to her boyfriend about him and I overheard and asked her about it later. When I got older I wanted to find him and even though I really had no idea where to start, I started calling people with his name in the phone book for the state we thought he lived in.

It didn't pan out and I dropped trying to find him for a few years until I got my first computer and started searching online. Even then it was hard and I wasn't having much luck until I started finding websites that you and the adopted person can register at and when they see a match they contact you. That's what happened to me.

In 2004 I registered at a site called The International Soundex Reunion Registry (ISRR) and I had a whole bunch on info on my brother so it was fairly easy to make a match with him since he had registered years before with his information.

I knew his adopted parents names, where and when he was born and his birth mom's name. I didn't know that he had spent many years searching for us as well.

I got a call from a lady at ISRR telling me she thought she had found him and was going to be sending letters to the last known address she had on file. They came back because he had moved. So she looked him up on the computer and found some of the other addresses he had lived at and sent out more letters. They all came back undeliverable because he had either not left a forwarding address or had moved from the address more than a year before and they only forward mail for a year.

One day she called me and told me we had one more chance to find him but I would have to send this letter myself. If you have a person's date of birth, parents names their full name and $10, back then you could send a letter to DMV and they would see if that person had a drivers license in their state and forward the letter to them. I don't know if California DMV does this anymore, I couldn't find a link for it. The lady at ISRR sent me the link way back when I did this.

I was warned that the letter I wrote to him had to be very benign. I couldn't say Hi, I'm your long lost sister. For whatever reason if the DMV reads the letter and thinks it would be upsetting... or anything but Hey, I'm trying to get in touch with you, here's my number...call me...   they won't forward it.

So I wrote the letter saying Hi, What my name was. My mother's name and that we were trying to get a hold of him would he please give me a call. And I left my phone number.

It was about 2 weeks later that I started to think that I wasn't going to get a response. The lady at ISRR was calling me just about everyday asking me if I had heard anything yet, she was so nice and supportive.  All this time, I hadn't told my mother that I was looking for my brother. I wasn't sure what I was going to do if I found out he was in jail, had died or was a dead beat. I'm not sure I would have told her if he had died, I think that might have been too much for her. So I kept it a secret until one day about 17 days after I had sent the letter to DMV..I got a call. It was my brother's wife. She asked me why I had sent such a strange letter to her husband. The funny thing was, she thought I was an old girlfriend trying to get a hold of him. lol

I explained to her who I was and why I had worded the letter the way I had and once she realized who she was talking to, she got all excited and told me that my brother was active Army and was in Iraq. She told me she usually just put all his mail in a box for him to open in a few months when he got home, but my letter was so unusual she had to call and find out who the heck I was. So I was very happy I had worded it so mysteriously.

Just then she got another call and told me it was my brother. She put me on hold gave him my number and he called me a few minutes later. We didn't talk for very long but we exchanged email addresses so we could email each other later. After I got off the phone I took a deep breath and called my mom. I just said, "I found him." She knew exactly who I was talking about and she started crying. She asked me all kinds of questions but when she found out he was in the Army and deployed in Iraq, she got scared thinking he could be killed before she had a chance to meet him.

We emailed back and forth for a while and my mom came over and I showed her all his pictures he had on the computer and printed out some for her, let her read all the emails we had shared and dictated an email from her while she was here to him and sent it. It was mostly emails because phone time wasn't available too often.

He was sent home in 2004 after being injured and a little while later he and his wife made the trip out here from California and we all got to meet for the first time. He's nuts, just like the rest of my family, so he fit right in really well. lol Like I've always said...crazy runs in my family. He and his wife divorced soon after but a few years later he met another lady and married her.

I'm just glad that I was able to find him before our mom passed away last year. 8 years isn't a lot of time to get to know someone, but they got a lot of memories in those 8 years and I'm glad about that. I know that finding him really mended a hole that was left in my mom's heart.

So if you're looking for an adopted family member, there are places out there that can help and ISRR is just one of them. Good luck in your search.
Posted by Mary Kirkland at 3:00 AM 4 comments