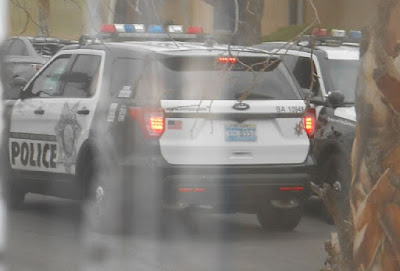 I took a picture from my bedroom window when 4 cop cars showed up on Monday evening. I actually was the one that called the police this time because some girl came onto our street accusing some guy across the street of hitting her car. I guess she followed him home from where he ran into her car. She was yelling and screaming at him and I thought that would be the end of it but then he ran to his apartment and got what I thought was a shotgun but Ken said it was an assault rifle. This crazy woman pulls a gun out of her purse and they're standing there not pointing the guns at each other but still holding them while shouting. I couldn't believe what I was seeing.

That's all I saw because I got the hell out of my bedroom window in case bullets started flying and called 911. The police were here in a couple of minutes but by then the woman was already gone and they guy with the rifle had run away. I don't know where he hid his rifle but I didn't see anyone get arrested. But now I know that guy has a weapon over there, so if I see him run in his apartment again, I'm ducking...just in case. 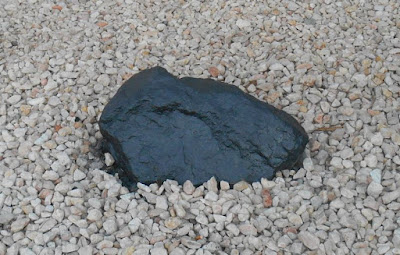 Oh and in case anyone was wondering the rocks finally got painted the rest of the way.

They're all black now. Still looks dumb to have black rocks but at least the entire rock is painted now.

Oh and for anyone on FB or Twitter who has seen me talk about the new apartment fee schedule and having to pay rent on the 1st with no grace period and that making my local news because of elderly and disabled people being on Social Security and not getting their checks until the 3rd...well because they got so many complaints about it they changed it back so that everyone can still pay their rent on the 3rd with no late payment fees. People were calling corporate, sending written letters to management, calling the news stations, calling lawyers and commenting about it all over social media. They finally gave in so I'm really happy about that. Here's the News Story if anyone is interested in what it was about.