Review: Rescue Me by N.J. Walters 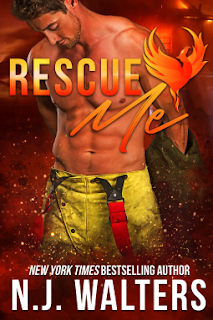 When a raging fire engulfs her apartment, Martha Benson can do nothing but send up desperate prayers that she might somehow be rescued—until she suddenly finds herself being carried out in the powerful arms of the one man she never expected to see again, Frank Ellis. When he miraculously parts the demonic wall of flames and leads them to safety, she’s stunned to realize that this ruggedly handsome man who once broke her heart can still stir sensual desires she’d long given up on ever feeling again.

As a young man, Frank was consumed by a haunting connection to fire that he did not understand and lived in fear that he might accidentally harm Martha. Forced to walk away from her for her own safety, he still dreamed of her and their youthful passion. And now that he has found her again nearly twenty years later, he’s determined to never leave her, and he knows he must learn to harness his mystical power to win her trust and make her his own.

Frank had loved Martha but his affinity for fire made him think that he wasn't safe to be around so for her own safety he broke her heart and left her. Years later he's a firefighter and Martha is trapped in a fire when none other than Frank comes to her rescue.

When Frank finds out from the fire investigators that several other fires have been started and other women have been targeted, he thinks that Martha might be in danger from a serial arsonist. So while Frank is keeping Martha safe from some nut job that wants to kill her, they get to know each other again and re-kindle their feelings for one another. They never really stopped loving or thinking of one another but Frank has a huge secret that comes out when another fire is set and Martha gets a good look at what Frank can do around fire. He's much more than anyone knew, he can control fire and so much more. He's not sure how Martha will react when she finds out but this novella ended on a sweet note that made me cry. This author has made me cry happy tears in three of her books so far but her books are becoming some of the best reads I've read this year.

For a quick read, this novella was packed with story, action, and some paranormal elements. This was a great second chance romance with just enough twists and turns to keep me reading. I really enjoyed this one.