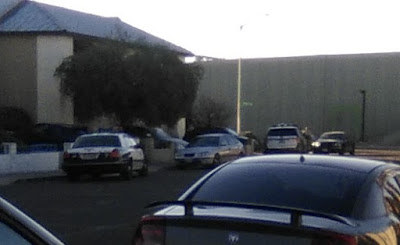 I was outside walking the dog at 7am and two police cars pulled up right across the street from me. There's one cop car is closer to me and one is further down the street. They went to the apartments on the corner who seem to be having the police there a lot. There are a lot of people in that building dealing drugs and a lot of the drug addicts and homeless people are hanging out there. 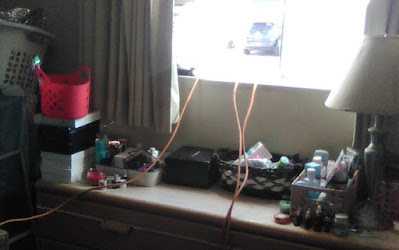 Tuesday morning the maintenance man asked if he could plug his extension cord into an electrical outlet in my bedroom because he was working on cleaning the plumbing in a drain right outside my window. So I plugged it in. But at first it wasn't working and I looked at the plug and pointed out that the prongs were very loose and that's probably why it wasn't working. 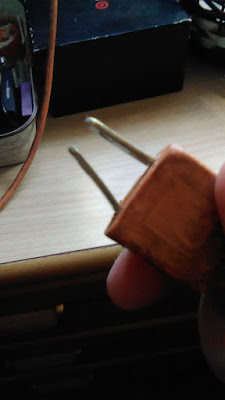 Here is the prongs on his extension corn. They were sooo loose. That one on the left just wiggled so much that it was obvious that was the problem and I pointed it out to him twice. He just kept asking me to plug it into a different outlet like I was an idiot and had no idea what I was talking about. I was married to an apartment maintenance man for 30 years. Dude, you need a new extension cord. I know how to plug into an outlet. So after wiggling it a little bit, it started working but I kept an eye on it while he was using it. 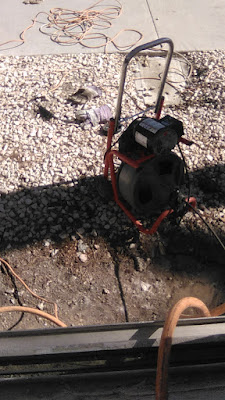 He had his snake outside my window and thankfully cleared the drain.
---
While my daughter was sitting outside a neighbor came over and asked if our electric bill had doubled. It has not but apparently hers and another neighbor in the building across from me, theirs has. They have complained to the managers but they won't do anything like have an electrician check out the wires. So she said she was going to hire an electrician and try to have the courts make them take the bill off the rent. I don't see that happening but good luck.
She said her refrigerator wasn't working right and she made a work order but the maintenance guy said it was working good enough. So she hired a refrigerator guy to come fix it and submitted the bill to the manager. She's waiting to see if they will take it off the rent. Again, good luck with that. They are not going to pay for that.
Another neighbor said that they tried to raise her rent before her lease was up in April and she called the corporate office and they told her that the management company could not raise her rent until April. She told them she is retired and has all the time in the world to go sit in court if they try and raise her rent before her lease is up. They fixed it. Her rent won't go up until April.
---
The high this week was 75F/23C
The low this week was 42F/5 C
So that's it for this week's Apartment Hell  Life! Be sure to come back next week for more.
Posted by Mary Kirkland at 12:00 AM 56 comments