Should You Give A Bunny As A Gift For Easter? 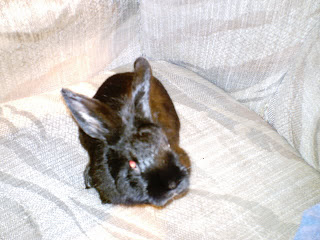 Here's a little bunny we found in the alley behind our apartment building a few years ago. He was just a baby and we looked to see if someone lost him but never found an owner so we found him a good home with people who already had bunnies and a big back yard.

You might think it's a great idea to give a pet to your niece, nephew or friends kid for Easter. But before you go and buy someone else a new pet there are things you should consider.

Do they want a new pet? Do their parents want them to have a new pet? Are the parents willing to take care of the new pet when the child gets tired of caring for it?

I took in more than a dozen hamsters, rats and a bunny when my daughter was little and her friends no longer wanted their pets and their parents weren't willing to take care of them. An animal is a lifelong commitment, not a commitment until you get tired of it or it starts acting in a way you don't like. I had 2 hamsters that bit the hell out of me, but did I give them away? No, I wore gloves when I picked them up and held them. Just because they were biters was no reason to give them away, they deserved a forever home and they got one.

Which is why it really makes me upset when I read people's posts on fb and twitter who have decided the pet they adopted is just to much trouble to take care of, so they send them back to the shelter or give them away to who ever will take them. And then later on I read how they adopted another animal and are trying again. Those types of people are the worst in my opinion. They should not have pets...period. Do not adopt a pet if you aren't willing to give them a forever home even if they have health problems, are biters, act out and need training or are not getting along with your other animals. Dogs will get along with other dogs if you get them training. If you are too lazy to train your dog..don't get a dog! 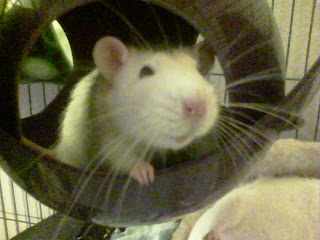 This is Ares, he's always been a little standoffish and didn't like being picked up like the other rats did. But I gave him his space, I gave him what he needed so he would be happy. It's not all about you when you have a pet, you have to give them what makes them happy too and if they don't like being held, a certain food, being around noises or kids then you have to figure out what they do like and try to give it to them. I found out that Ares liked to be petted as long as he was sitting inside the cage and I wasn't trying to pick him up, so that's what I did. He was very friendly, just didn't want to be picked up. If I turned the cage around and let him hop out onto the couch himself, he would crawl around on me and was fine with that. As a responsible pet owner it's up to you to find out what works for the pets you bring in your home. 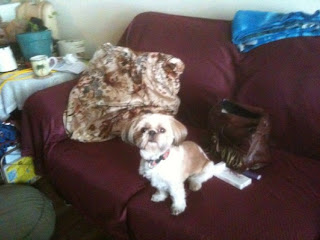 This was my mom's dog, Cupcake. When mom passed away my brothers and I got together and decided we were going to keep her. My younger brother Billy, was all set to take her home but our older brother John, asked and all but pleaded if he could take her home because she had been our mother's dog and he wanted her.

Billy said yes, with the understanding that if for whatever reason he couldn't keep the dog he would give her to Billy.

I don't think it was even two months when John said that he couldn't keep Cupcake because his other dog was being a bully and was picking fights with her. So Billy was making preparations to go and pick the dog up, he was just waiting on confirmation that he didn't want to keep the dog. Then just a day or so later John tells us that he gave Cupcake away to a neighbor lady (no proof that he didn't just take her to a shelter) and he wouldn't tell us who.

Why did he do this, you might be asking? Because this is the type of POS this person is. Instead of giving away the bully dog that was picking on the little dog that had been his mother's or getting big bully dog training to get along with the little dog...he gives our mom's dog away right out from underneath us because that's the type of person he is.

It's people like this and others that should never have pets. If he hadn't been a lazy pet owner, he would have gotten his big bully dog training and he could have kept both dogs. But this situation wasn't really about the dogs at all, it was about making sure that Billy didn't have a chance to come and get the dog. To cause as much pain as possible.

It's troubling to think about but there are owners out there that think nothing about the pets they have. They either have them so they can fight them...ie..dog fighters who have pit bulls.

Or they have them to be guard dogs in their place of business or front yard and they are always chained up outside with little to no human interaction, they are there to do a job.

And then there are people who are just too naive to have a pet because they have no idea how to take care of them. I saw a few of those types of people when I rescued a few hamsters from families who no longer wanted them.

As you can tell this is a cause near and dear to my heart. It breaks my heart to see neglected animals or animals thought of as throw away pets. If you adopt a pet, they should be with you until you or they, die. If you cannot or will not give an animal a forever home, no matter what...then don't adopt.