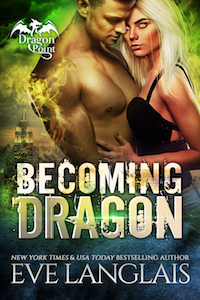 Brandon started out life as a simple gator shifter in the swamp. Now he’s a monster. And beasts don’t get fairy tale endings.

Apparently someone needs to explain that to Aimi. The woman with silver hair, and attitude, has this ridiculous notion that Brandon is something else. Something impossible.

I am not a dragon.

But dragons do exist. They live among the humans and shifters, hidden for the moment. His uncle Theo wants to change that and doesn’t care who he hurts along the way. Even family.

Can Brandon stop him before it’s too late?

Brandon finds out that his rich uncle Theo has kidnapped his sister and in order to keep her safe, Brandon agree's to be experimented on in Theo's lab. Brandon starts out as a gator shifter but after the experiments he thinks he's just a monster when he's actually a Dragon shifter who is stuck half way between forms. He escapes the lab and his uncle in order to find his sister and save her from Theo after Theo tells the world that shifters are real and have been living among humans for a long time. Aimi finds Brandon on a rooftop and claims him as her mate. At first he thinks she crazy since he doesn't believe in Dragons or the fact that she thinks he's handsome in his hybrid form. But he slowly starts to believe her and her family after they help him.

Aimi's family is super funny, they get in her business all the time and the remarks between them made me laugh out loud several times. Aimi's family also helps Brandon find his sister but things aren't exactly the way that he thought they'd be. Uncle Theo is crazy, even more crazy than I first thought and there's more going on than we see in this book so I hope we get more information about Brandon's sister and what she's up to in the next book.

This was a great first book to this series and made me intrigued for the next book and more of the story. I love Brandon and Aimi, their romance was a wild, fun one that had me laughing. When the humans find out about shifters, it does make it hard for shifters to live peacefully among them because some humans are paranoid and afraid. It doesn't help that videos are being released showing the bad side of shifters either.

I've always loved this author's books but this is now one of my favorites.