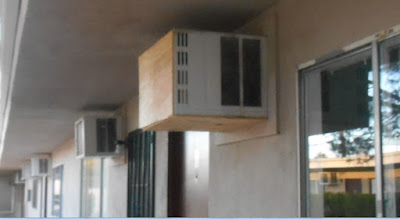 Our manager was having a hard time keeping the homeless crackheads that seem to mill around one particular apartment in my courtyard, out of this vacant apartment. The maintenance man had removed the air conditioner from the can and that left a big open hole in the front face of the can that 'someone' could crawl through and get in the vacant apartment. After the apartment manager found a mess in the vacant apartment from someone sleeping in there all weekend, she ordered the maintenance man to screw plywood to the openings on the can. Wouldn't it have been easier just to put another air conditioner in the can?

My daughter moved into her new apartment about a month ago. 2 weeks ago her downstairs neighbor had a fight and someone broke the door down. The police came and the guy was taken to jail. The apartment is vacant now. Last week some guy came to her door, knocked and then tried to open her door knob. Then she heard him and another guy kick the door in downstairs in the vacant apartment. She called the police but they were gone by the time they got there. Then 2 days ago the apartment manager there called the police to check that apartment and caught the two guys sleeping there there and they were arrested. I'm telling you this because I don't think it would matter if we moved from here because this kind of crazy stuff seems to happen all over here in Vegas.

We also talked to our apartment manager and she said she got taken to court last week by the woman who's apartment had bullets come through the wall when the apartment next to hers was shot up over New years. After the bullet holes in her walls happened she asked the manager to be let out of her lease because she wanted to move. She has a small son and is pregnant but the manager said no. So this woman took her to court and the judge ordered my apartment manager to let her out of her lease with no penalties and she is so pissed off about it. She should have just let her out of the lease. I mean, c'mon! Did this dumbass really think she was gonna win this in court? The tenants apartment was shot up, of course the judge is gonna let her out of her lease. So that woman and her family are moving out this weekend and my apartment manager is telling anyone and everyone how the judge made a bad call. Are you serious? The manager thinks this complex is so dangerous that she won't even move into the manager's apartment that she would get for free! She said she won't live on this property. Not that I blame her.