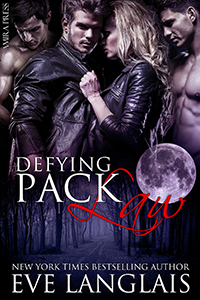 Pack Law states she must have more than one mate.
Like Hell.

Rather than be forced into a mating with more than one man, Dana flees the pack. Flees everything she knows, everyone she loves. She lives on the run and can't seem to find happiness.

All that changes the day her first love, Nathan, finds her and brings her back home. He's not letting her go, not again. As alpha, he now makes the rules and he's decided to hell with the laws, he wants Dana.

Except Dana's changed since she left. Maybe the pack ways aren't so bad after all and when she decides to accept fate... she finds love times three.

I love this authors books so when I saw that this one was free on Amazon, I scooped it up.

Dana grew up in a pack where women are not treated right and are usually shared by more than one male in the pack. She saw her mother treated badly and never waned to live this lifestyle. But she grew to love Nathan and even got engaged to him. He turns out to be just as bad as the other males and tells her that after they're mated she will be shared by other males. She isn't having any of that and feels completely betrayed by Nathan so she leaves. She knows that she has to keep moving or else her pack might find her. She is on the run for years and then one day Nathan finds her and drags her back to the pack.

It's at this point that I stopped enjoying this book. She's held against her will but somehow she's not so against having several male partners after reconsidering how her life has been these last few years. Dana is very annoying and Nathan is just a jerk. I didn't like him at all. I realize that they aren't human, they were wolf shifters and if humans were doing this I would have called it abusive. But I had to keep telling myself that they are wolf shifters in a pack and the same rules don't apply to them. But it was hard to like Nathan and Dana. I didn't like the whole dynamic between them or how hot headed he seemed to be. Now when the other males are brought into the picture, I really liked them. They brought the parts that were missing. The gentleness, the tenderness, the romance and love.

It's not until the last half of this book that we find out what really happened and why Nathan changed his mind about sharing her back before she left. It started to make more sense and I could see that Nathan was put in a hard spot because it wasn't really his choice. And then there's a huge twist at the end of the book that I did like. It was wild to like the beginning of the book, get mad at Nathan and hate him and then almost feel bad for him towards the end. So while I didn't love this story, I did like parts of it and think it's worth the read.