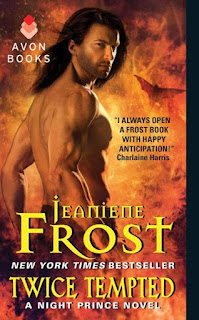 Book Blurb
Dating the Prince of Darkness has its challenges . . .

Leila's psychic abilities have been failing her, and now she isn't sure what the future holds. If that weren't enough, her lover Vlad has been acting distant. Though Leila is a mere mortal, she's also a modern woman who refuses to accept the cold shoulder treatment forever--especially from the darkly handsome vampire who still won't admit that he loves her . . .

Like choosing between eternal love and a loveless eternity . . .

Soon circumstances send Leila back to the carnival circuit, where tragedy strikes. And when she finds herself in the crosshairs of a killer who may be closer than she realizes, Leila must decide who to trust-- the fiery vampire who arouses her passions like no other or the tortured knight who longs to be more than a friend? With danger stalking her every step of the way, all it takes is one wrong move to damn her for eternity . . .

My Review
Leila is a human with a special power and she's in love with a vampire named Vlad, yes that Vlad. He shows her in his own way that he cares for her but she wants him to love her and say the words but he can't. There are two vampires that care for Leila but her heart belongs to Vlad, but when an explosion happens, she's not sure who she can trust.

I started out not liking Vlad at all but I could understand why he was emotionally cutting himself off from the woman who loved him with all her heart. Even vampires can be hurt by love and he's determined not to let that happen again. So he and Leila part ways but he comes back as fast as he can when he finds out she's in danger...I guess he really does love her.

Vlad may be an alpha uber vamp with serious control issues but underneath it all Leila might actually be able to find the caring vampire that she's longing for.

I loved that in the beginning of the book where there was a vampire named Hannibal. How fitting is that? Crazy, blood sucking man named Hannibal. I'm just surprised that someone hadn't thought of that before now.

The bad guy turns out to be someone who's into witchcraft and just when we think they'll be caught, they use a spell to make the rats who are around where they are attack the good guys. Now you know this was one of my favorite parts. It's like they took a page right out of Willard *one of my favorite movies* and took control of the rats.

Oh and there were ghouls and ghouls eat vampires as well as people!

I loved this book. All the action, the mystery, the romance and getting to know Vlad, who is a blood thirsty psycho but at the same time can love the woman who loves him for who he is. I loved everything about this book...until I got to the end and there was a cliffhanger. What? Why would you do that to me? C'mon! If you're going to go through the entire book trying to figure out who is trying to kill you and you finally find out who it is...you end the book finding him and making him pay for his transgressions. What you don't do is leave the end of the story on a cliffhanger where you have to read the next book to find out what happens next. And because of that ending I'm giving this book 4 out of 5 stars instead of the 5 stars I intended to give it while I was reading it.