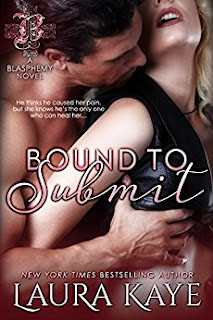 He thinks he caused her pain, but she knows he’s the only one who can heal her…

Kenna Sloane lost her career and her arm in the Marines, and now she feels like she’s losing herself. Submission is the only thing that ever freed her from pain and made her feel secure, and Kenna needs to serve again. Bad. The only problem is the Dom she wants once refused her submission and broke her heart, but, scarred on the inside and out, she’s not looking for love this time. She’s not even sure she’s capable.

Kenna is hurting, physically and mentally and most of it stems from what happened while she was in the Marines. Her best friend was killed and she lost an arm. She's trying to deal with the physical pain and the phantom pain she still has but nothing seems to be working. She's distant and not the happy person she used to be and she wants more, she's just not sure how to get it.

Kenna has a lot of guilt to work through, she's hoping that being back at the club will help her with that as well as her physical pain but being back with Griffin opens up a lot of emotions she's tried hard to hide or keep pushed back so she doesn't have to deal with them.

I really liked Griffin, I started out not liking him because of how he pushed her away but he really redeemed himself during this book.

I really liked or wanted to like this book as I was reading it but I had a few problems with a couple of things. First, Kenna hasn't seen Griffin in 5 years because he told her he wasn't interested in a relationship when she told him she loved him. It hurt her so badly that she cut her phone off, moved and joined the Marines. So now that she's emotionally vulnerable she wants to subject herself to the same man who emotionally hurt her before? I had a big problem with that and I didn't like it. The second thing was Kenna just fell back for him too fast. He hurt her before, she's now emotionally a mess and when they meet back up it seemed like even though she wanted to go slow she just slipped right back into a routine with him and she believed what he said about missing her and how sending her away had been a mistake. Maybe it's just me but I don't think I could have trusted him again so easily.

Now but for those to things about the storyline that I didn't care for, I did like this story but it was hard to believe that they just fell back together so easily. I did enjoy the other parts of the book and ended up liking Griffin and how he helped her through the problems she was having. Even with the couple of problems I had with the storyline, it was a good book.

You might have noticed I didn't do a Freebie Friday post today. That's because I didn't receive any freebies this week. So I posted a review instead.