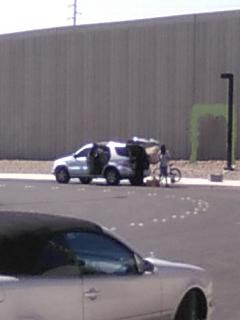 This car pulled up and set out a lamp, and a couple of other things that were all broken and was obvious it came from someone's trash. They taped a sign to a post that said, "Sidewalk Sale".
But what they were really doing was selling drugs from the back of the car. And somehow people knew it. People kept pulling up to the car, and buying something small from the guy that was sitting in the back. People would ride up on bicycles or walk up and buy something from the guy sitting in the back of the car. They stayed for a couple of hours and left. The lamp and other things they had sitting out all went in our garbage can.

I was out walking Falcor and noticed two ambulances in the parking lot of the grocery store next door to me. I saw someone come out of one of the stores on a stretcher and the ambulance rode off. Then this ambulance that was farther away pulled up closer to the front of the store but they just sat there.

I don't know if anyone else was taken to the hospital. I know the pictures are awful because I took it with my phone. But you get the idea.
The high this week was 109F/42C
The low this week was 77F/25C
So that's it for this week's Apartment Hell  Life! Be sure to come back next week for more.
Posted by Mary Kirkland at 12:00 AM 42 comments