Review: Baby I'm Howling For You by Christine Warren 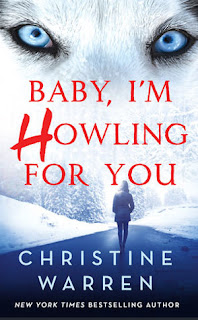 WELCOME TO ALPHAVILLE, where the she-wolves and alpha-males play. . .for keeps.

Renny Landry is a wolf on the run. Pursued by a shapeshifting stalker and his slobbering pack of killer coyotes, she is forced to flee her job as a librarian to find sanctuary in the wooded hills of Alpha, Washington. A well-secluded safe space for troubled shifters, Alpha is Renny’s last hope. But the first person she meets there is a gorgeous alpha male with fiery eyes, fierce tattoos, and one ferocious appetite—for her…

Mick Fischer thought he left his past behind when he moved to Alpha. But fate has a way of biting him in the tail when a female wolf shows up on his property. Wounded, desperate—and disarmingly hot—Renny brings out the snarling, protective alpha beast in Mick like no other woman he’s known. Can these two haunted, hunted wolves manage to mate for life…even as the deadliest past demons howl at their heels?

Renny found herself on the run from coyote enforcers who were sent after her. She stumbles onto an alpha wolf's territory as she's being chased and even though the wolf shifter might kill her for invading his territory, that was better than being caught by those who were after her. She had taken a job as a librarian but when the coyote alpha of the town wouldn't take no for an answer regarding her, she had to run and she ran right into Mick's cabin.

After people in the town found out about her, they made her feel very welcome. Mick especially wanted her to stick around since he was completely enamored with her but was taking things slow. He had lost his mate and was a little gun shy about new relationships even though his wolf was wanting to get a lot closer to her.

You would think that the guy who has been chasing her would give up now that she's in a town full of shifters that are protecting her but no, he's not right in the head and it shows so many times in the actions he takes.