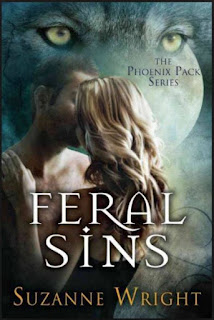 When female wolf shifter Taryn Warner first encounters Trey Coleman, an alpha male wolf shifter with a dangerous reputation, she’s determined to resist his charms. After all, Trey—who was only fourteen when he defeated his own father in a duel, winning the right to be alpha of his pack—can’t have anything to offer the talented healer besides trouble, or so she thinks. Taryn finds herself drawn in by Trey’s forceful demeanor and arctic-blue eyes, and she eventually agrees to enter an uneasy alliance with him. If the two succeed in convincing their respective packs that they’ve chosen each other as mates, Trey will win valuable political allies, while Taryn will escape an odious arranged mating.

But there are a lot of potential pitfalls to this plan—including the very real possibility that the wolf shifters, overwhelmed by their growing attraction to each other, will be unable to maintain the clear heads needed to pull off the deception.

Taryn wakes up in a cave that was decked out to be quite livable but not knowing how she got there. She finds herself face to face with Trey, an alpha who wants to speak with her. Taryn is an alpha in her own right so when she comes face to face with Trey, who she's heard is a psycho and has a wolf that is feral, she doesn't act scared like he thinks she will. No, she's pissed off and rightly so but Trey is surprised and excited not to find fear in her stare when she looks at him.

Taryn is a healer and a latent, meaning she couldn't fully shift into her wolf but she could partially shift. Her father and alpha of her pack wanted her to be mated to another alpha so he'd have an alliance with that pack but she wanted nothing to do with the male that her father had picked for her.

While Taryn has problems, Trey has a few problems of his own. His alpha uncle wants his pack and Treys pack to be united and the uncle wants to be alpha over both of them. Trey doesn't want this to happen to he says he'll help Taryn with her problem if she's willing to help him with his. She agrees and they start spending time together, getting closer and finding out that they have the hots for one another. But that's ok at first because it helps make their mating seem real even though it's only temporary, or so they think. The longer they stay together and the more they get to know each other the closer they become.

There are wolf pack fights that are down right bloody, betrayal, secrets, and twists that I never saw coming. This was one of the best books I've read in a while. Once I started reading, I didn't stop until I was finished because the story just kept getting better. I highly recommend this book.