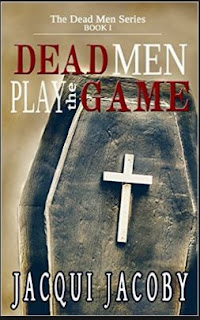 For a hundred years, Ian Stuart has fought the monster controlling his life. Living as a human among humans, he wants to fill the void that has followed him from one empty, lonely relationship to another other. Ashley Barrow is working the worst murder case in Davenport, Oregon's history. She needs a drink to forget the detailed images in her mind. When she walks into Ian's pub, Ian knows their lives are about to change, if only for a short while. Vampire and human, their relationships can only last so long. But an enemy from Ian's past has his own agenda about their future. His sadistic revenge changes Ashley forever, leaving Ian and his long time friends – Travis, Jason, Quinn and Evan -- desperate to ease her into her new life and find a way to defeat their enemy.

Ashley Barrows is a detective and she's trying to find a murderer but what she doesn't know is that her case will lead her right into the path of a crazy vampire.

Ian Stuart is a vampire but he's trying to not let the monster inside him rule his life. He just wants to live a normal life.

After having a really bad day, Ashley walks into the bar Ian works at, they talk and make a small connection. He asks her to come back the next night and she does after another really bad day. They have their first date that night and she flirts with a couple of Ian's roommates texting on his phone while he laughs about it. It was really cute to see them get along so well after knowing each other such a small amount of time.

I seriously love the banter between all of the guys and how easily Ash fit in and gave as good as she got.

Dating a vampire is hard enough but when an enemy from Ian's past turns up to make make their lives even worse, all hell breaks loose and Ashley gets the worst of it.

I'm a huge paranormal romance fan and when the book has vampires, that's just an added bonus for me.

All of these characters really resonate with me, I really like them and how they act with each other. They've been together for a long time. They're vampires, so long lives and long friendships come with the territory. At first I thought it kinda strange that they all live together but they somehow make it work. I like how the author really made these characters so likable but at the same time fierce when something is done to one they care for.

If you're like me and you enjoy a really fabulous vampire romance series you can sink your teeth into, then this might just be what you've been looking for.