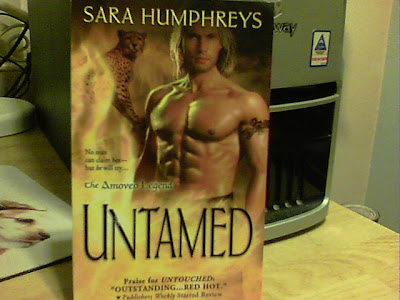 This third book in The Amoveo Legend series by Sara Humphreys is set in a small town, where everyone knows everyone else and everything that's going go with everyone. Layla knows what she is but is determined not to end up like her mother. Layla isn't going to drop her life and become everything she fears just because her mate has found her and may want her too.

William has found his mate and has tried to connect with her in the dream realm but she isn't cooperating. William, also know as The Ice Man or Mr. Freeze by some of his friends doesn't show his emotions all that often but this petite redhead is going to make him do things he never thought he would do...and like it.

This story proves that opposites really do attract but she's not ready for the emotions and feelings he brings out in her. But when someone hurts Rosie, the woman that has raised Layla and she ends up in the hospital, all bets are off and William calls in his friends for help. Layla meets two other hybrids and sees how much in love they are with their husbands and that seems to make her feel a little bit better about the whole William situation...for a while at least. The twists and turns in this book really had my heart thumping and made it extremely hard to put the book down until the end.

If you're looking for a book with action, backstabbing, shifters of all kinds, twists and turns and a love story you won't soon forget, then this is the book you've been looking for.

I love the whole series and can only hope that there are more books to come. This book can be read as a stand alone but with all the different characters showing up in the different books it's best to read this series from the beginning.
Posted by Mary Kirkland at 6:12 PM 6 comments

When it comes to books, ebooks, kindles, nooks whatever...I am not very forward thinking. I'm just not, I know it's a personality flaw and I'm ok with that.

Ereaders don't have that new book smell, nor will they ever have that old book smell. You know what I'm talking about. I paperback book that's been sitting on your shelf for 20 years, and yes, I do have books sitting on my shelf that are that old, have a certain old book smell to them. You aren't going to get that with an ebook.

But some of you are probably thinking that's a good thing. Ok, let me ask you something else. What about first edition, signed books that I have? I would much rather have a hard Cover first edition and signed book than a ebook edition that while it can be signed I hear...on Kindles I think...what happens if your Kindle breaks...all your books are lost, no?

I am 42 years old, while I'm not a senior I do think I fall into that 'older generation' slot that isn't adjusting to the new technology. I know it happens because my dad is amazed by the things I can do on my laptop. he has no concept of what a computer is or can do even though I've tried to show him when he comes over. But he's 80 years old and says he's too old to learn something like this. So am I falling into that sorta of mind set? Maybe I am, but I'm sure that when my grandkids are my age their children will have the newest technology craze and it will driving my daughter nuts and she might even be complaining about it like I seem to be doing about ereaders all the time. But who knows.

Times, they are a changing, I'm just not changing with them. Printed books will always have a place in our culture long after the new car smell of those Kindles have worn off. Does an ebook give you the same olfactory and tactile experience that a 20 year old first edition, signed Hard Cover limited edition book will, I don't think so.
Posted by Mary Kirkland at 3:00 AM 3 comments