This is a weekly blog post that I'm calling Apartment Hell  Life. I've mentioned a few times some of the crazy things that go on in and around my apartment complex in the past 25 years that we've lived here and people keep telling me I should write a book. But instead of a book, I've decided to share the crazy things that have happened in and around my apartment complex in the last 24 years here in a weekly blog post.
Last Saturday night around 9:30pm we heard about 5 gunshots. But they weren't really close so I didn't call the police. They sounded like they were at least half a block away. I searched the news but didn't see anything about a shooting around here. 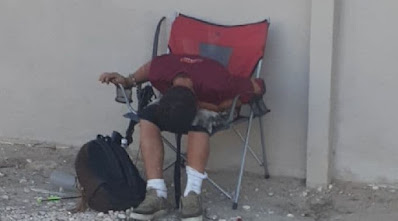 My daughter took this picture a while back and sent it to me this week. One of the druggies was slumped over passed out in his chair he had sitting in front of my building.
When I see this kind of thing, I usually check to see if they're still alive. I'm glad I do because I found out from my daughter that a few neighbors told her two different people died of drug overdoses on my street last week. I didn't see the police or coroner here so I had no idea. One guy died in the grass across the street and another guy died in the alley of my apartment complex. Both from drug overdoses. It's sad that happens. 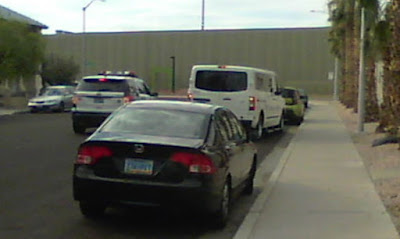 I saw the police and the homeless shelter van on my street again asking the homeless people if they wanted to go to the shelter. Most don't go because they can't do drugs or drink alcohol in the shelters. No one got in the van this time.
--- 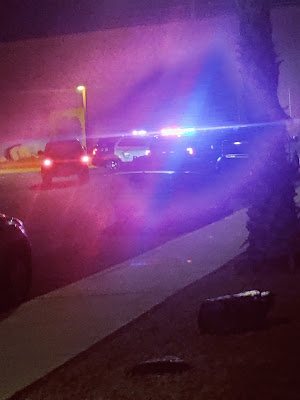 Wednesday night at 11:30PM I heard the police siren for just a second and looked out my bedroom window. At first there were only 2 police cars. Then it quickly became 4 police cars. 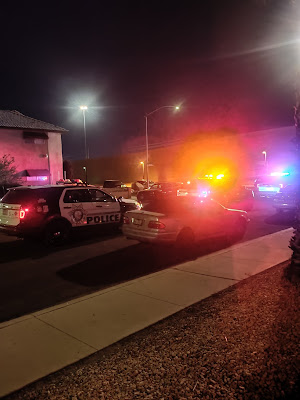 Within 10 minutes there were 6 police cars all lined up on my street, right in front of my building. One woman was in handcuffs while they searched her truck. She was later arrested and her truck was towed.
---
The high this week was 97F/36C
The low this week was 67F/19C
So that's it for this week's Apartment Hell  Life! Be sure to come back next week for more.
Posted by Mary Kirkland at 12:00 AM 47 comments