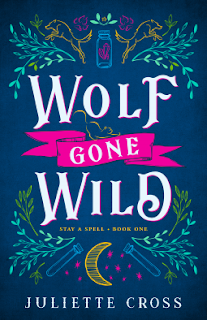 What's the worst thing that can happen to a werewolf? Unable to shift for three months, Mateo Cruz knows all too well. His wolf has taken up residence in his head, taunting him night and day with vividly violent and carnal thoughts. Convinced he's cursed, he needs the help of a powerful witch before he literally goes insane. ​

Evie Savoie has always obeyed the house rules of her coven--no werewolves. They're known for being moody and volatile. So, when a distempered, dangerous werewolf strolls into the bar and almost strangles one of her late-night customers, she's ready to bounce him through the door. But the desperation in his eyes when he begs her to help him softens her heart and convinces her to bend the rules. ​

What Evie doesn't know is that Mateo's wolf has a mind of his own. And now that she's in his sights, he wants only one thing. Her.

Mateo thinks he's been cursed with a hex so he's not able to shift into his wolf form and his inner wolf is in his head all the time. Mateo's inner wolf, Alpha is a mean, viscous animal who wants to fight all the time. He's constantly pushing Mateo to hit people and it's driving Mateo crazy so he asks a witch for help.

Evie and her sisters are witches but they usually don't help werewolves because they are dangerous predators. But it turns out that Mateo is more dangerous if they don't try and help him because his inner animal is unpredictable.

Evie and her sisters research a way to help Mateo but it's taking some time and Mateo realizes that his wolf, Alpha is calmer when Evie is around so he asks to spend a few hours a day with her and she agree's. The only problem with that is Mateo and Evie both start lusting after each other which makes things a little awkward.

Evie and her sisters try to remove the hex but it turns out to be more powerful than anything they've ever come up against. So while the sisters do more research, Evie and Mateo spend more time together and finally give in to their mutual attraction. Mateo and Alpha are sexy as hell and even though Evie knows she should be afraid of Alpha, she finds him to be sexy with his dominance and gruff nature. The fact that Alpha can actually speak through Mateo when he comes to the surface is different and I really liked it.

I did not know who the villain was in this story until right before we see for ourselves. I actually thought it was someone else and for other reasons and I was wrong which was fun. I like being surprised. This was such a fun book to read and I loved the characters. I love all the sisters and am really looking forward to reading more of this series now.