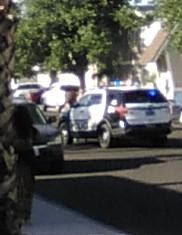 I heard a police siren outside and looked out my bedroom window and sure enough the police had a couple of tweakers pulled over on the sidewalk. I watched a while and both of them were put in handcuffs and put in the police car. They were both taken away so I assume that they were arrested. They are fairly new tweakers around here and I've only seen them down at drug dealer's apartment a couple of times. Hopefully they don't come back. 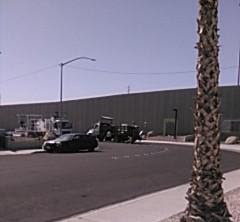 I heard some loud noises at 7am one morning and looked outside to see a couple of trucks on my street. They were putting the reflective round plastic things in the middle of the road that you can see at night. 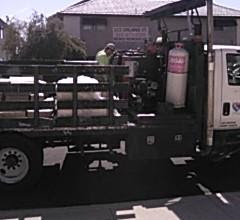 I did get one good close up picture of the truck when it came back by and parked in front of my window.
It was a fairly quiet week this week.
---
The high this week was 103F/39C
The low this week was 67F/19C
So that's it for this week's Apartment Hell  Life! Be sure to come back next week for more.
Posted by Mary Kirkland at 12:00 AM 42 comments