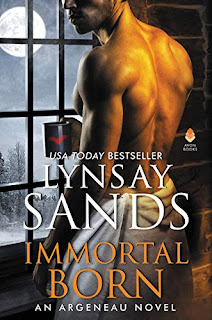 Book Description
A simple promise to protect her friend’s infant son has turned Allie Chambers’ existence upside down. Caring for—and feeding—an orphaned vampire baby has been tricky enough. But as little Liam grows, so does his appetite. He needs more blood than she can personally supply. And when her attempts to steal from a blood bank go awry, Allie wakes up surrounded by doctors, cops…and the gorgeous, mesmerizing Magnus, who she can neither trust nor resist.
Magnus never expected to find his life mate breaking into a blood bank. Clearly, Allie is already entwined with his world—in deeper, more dangerous ways than she realizes. A band of vicious rogue immortals is in pursuit, and Magnus’ first task is to keep her safe. His second: to awaken her to mind-blowing pleasure, and hope she’ll accept the life, and the passion, that only he can offer.
My Review
Allie made a promise to her immortal neighbor that she would take care of her son if the people who were after her showed up, so when they did and the neighbor's house exploded after she was given the baby to take care of, she believed the mother to be dead. Now she had to take care of a vampire baby with no help.
Magnus is an immortal (Think vampire but they call themselves immortal's) and he thinks Allie might be his mate, so when she's arrested for breaking into a blood bank, he checks it out.
Allie hit her head during the robbery to get blood for little Liam so the officers wanted her to spend the night in the hospital but she escaped to go home, get Liam and move to a new location where the vampires couldn't find them. But the bad vampires (rogues) are waiting at her house and try to kidnap her until Magnus and his friend save her and Liam. While it's not how he wanted to introduce himself to her at least she knows he's one of the good guys.
Allie isn't sure what to make of Magnus and his friends. She isn't sure she can trust them at first and some of them do come on too strong and make her uncomfortable with their questions about Liam and how she got him but the women were there to make it easier for her and explain things better than the men were doing. Magnus and the others realize that Allie and Liam are in danger once she tells them the name of the rogue that Liam's mother had told her had been keeping her and Liam's father captive when she escaped. It's then that Allie realizes how much danger she and Liam have been in but Magnus and the others assure her that she's safe now as long as she stays with them. I'm not sure I would have believed everything and felt safe with them at first either but they all did a good job of making her trust them.
When the bad guy does finally come after her like I knew he would, Magnus and the others go out looking for her and to find the bad guy to get rid of him once and for all, since they knew about him and have been looking for this person for a while.
I've been reading this series for some time so I really liked that we get to see some of the other characters that have been in the series. It's nice to get a look at how some previous characters are doing while reading a long series.
I really enjoyed this book and liked that there was action right from the near beginning of the book. The pace was good and kept me reading, wondering what would happen next. I really liked Magnus and Allie together and liked the fact that they didn't fall for each other really fast, that it took a little time for her to fall for him.
I give this book 5 out of 5 stars.
Amazon
Posted by Mary Kirkland at 12:00 AM 30 comments