Review: My Plan B by Shelley Munro 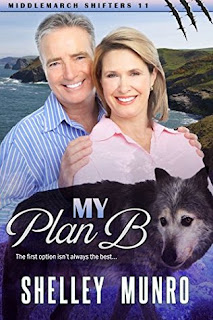 Plan A sucks. Move over for plan B…

Sports commentator and reporter, Megan Saxon, has it all. The perfect career and freedom to do anything she wants, but as the years creep by she realizes love, or at least male companionship, has thumbed its nose at her. With the help of her agent-friend, she hatches Plan B. A brief love affair with a younger man will cure all ills and help her plan for the future.

The problem with plan B? Nothing, I repeat nothing, goes the way she plans, and she’s left gasping for breath, dodging reporters and suffering acute embarrassment.

The. Worst. Blushing. Epidemic. Ever.

Long-term widower and werewolf, Jacey Anderson, has moved to small country town Middlemarch to be near his grieving adult stepson, Henry, and to embrace the wide, open spaces with his wolf. He’s not expecting romance and especially with a public figure who attracts reporters like flies at a dung heap. His attraction to the sexy, sassy Megan has disaster written all over it, yet try telling that to his moonstruck wolf.

Yes, this Plan B has potential calamity for both parties. A pity that neither of them has a lick of good sense when they’re in the same room, touching… Kissing… Caressing…

Contains: werewolves, feline shifters, and creatures that howl at the night moon. There is also hot love, laughter and lots of teasing.

While Jacey, his son and friend are out for a run in their animal forms, they stumble across a woman taking pictures. She didn't spot them but she got pictures of them. They don't know how but they know they have to get to her phone and delete the pictures.

Megan gets sent to cover a piece in Middlemarch after getting replaced by a younger female in the space she had been reporting on. While there reporting on the Rugby teams, she meets Jacey and starts dating him not knowing he's a wolf shifter.

After getting caught in their animal forms and getting caught on Megan's phone in the form of pictures, Jacey and his son know they have to delete the pictures but they aren't sure how to go about it. While Jacey is in Megan's room he and his wolf both end up wanting her. So the next day when he spots her and they end up having coffee together, Jacey takes the opportunity to talk to her and get to know her a little better. Later he wins a date with her through a raffle, that's when things really heat up. These two are seriously attracted to each other but Megan has no idea this guy is a wolf shifter.

There was a huge twist towards the end of the book that I kinda saw coming but loved nonetheless. The secondary characters are just as great as Jacey and Megan and I really liked them. His whole family are a bunch of great people that made Megan feel at home, I really liked that about them.

I loved this book and think it added greatly to this series as a whole.