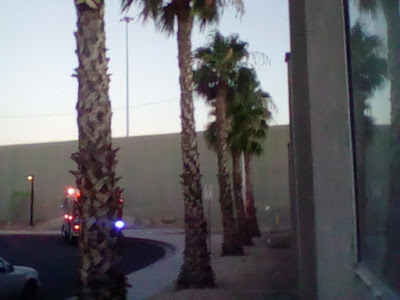 This palm tree is always in the way when I'm trying to take pictures on this side of the street. But hopefully you can make out the red fire truck and lights. On Monday the fire truck and ambulance showed up for drug dealer's wife. I found out from my neighbor that drug dealer's wife called my neighbor and asked for help because one of the meth heads tried to shoot her up with heroin (with her permission) in the leg but missed the vein and shot it in her leg which lead to an infection. But drug dealer's wife waited over a week to get help and by that time she couldn't walk. The meth and crack heads in her apartment wouldn't get her help because they didn't want to be kicked out of the apartment so they left her in her bed to suffer. She finally called my neighbor for help because she knew she would help her. 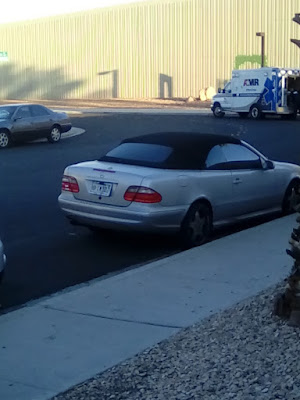 So my neighbor called an ambulance and told all the methheads to get out of the apartment when she was taken to the ER. But drug dealer's wife left one of the crackheads that she trusted to watch the two dogs in her apartment and to make sure that none of the other drug addicts broke into her apartment and stole anything but he's not supposed to let anyone else in the apartment.
On Tuesday I heard a bunch of yelling coming from drug dealer's apartment and when I saw my neighbor down there banging on the door, I went down there to see what was going on. She told me that there was a bunch of druggies in the apartment and they wouldn't open the door and leave. She was yelling for the one guy who is supposed to be there to open the door or she was going to call the police. I told her I would go call the police, so when they heard me I guess they opened the door and all but the one guy who is supposed to be there left. So I didn't have to call the police. The police would have made the one guy leave because he isn't on the lease and they would have taken the dogs to the pound and my neighbor didn't want to see that happen.
But drug dealer's wife is in the hospital. Her leg got infected, she's septic, in and out of consciousness and the infection has moved to the bone in her leg. She is really bad shape. Her husband (drug dealer) is still in jail until August. I've seen people knocking on drug dealer's door but the one guy hasn't been letting anyone else in there. So it's just wait and see what happens at this point.
---
The high this week was 112F/44C
The low this week was 86F/30C
So that's it for this week's Apartment Hell  Life! Be sure to come back next week for more.
Posted by Mary Kirkland at 12:00 AM 46 comments