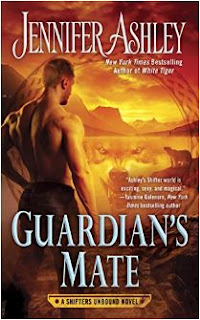 Chosen as the Guardian of her Montana Shiftertown, wolf Shifter Rae Lyall is facing opposition—for no woman has ever been selected for this powerful position. Still adjusting to the new authority thrust upon her, Rae travels to train with Zander Moncrieff, a Shifter healer, tasked with teaching her about her new role and its responsibilities.

A polar bear Shifter, Zander wears no Collar and follows no rules but his own. Rae finds him arrogant and demanding, yet compelling and intriguing. Zander has no wish to mate but the sassy Guardian is drawing him out of his shell, stirring feelings long suppressed. And when a new threat looms over Rae’s home, she and Zander must race to the rescue, forced closer to danger...and to each other.

I've been reading this series since the very first book. The shifters in this series have been through a lot and they seriously deserve a break or some good news. That's why I was so happy to see Zander get his own book. I've loved this huge polar bear shifter since he first showed up. Zander is a polar bear shifter and a healer. He heals shifters from serious wounds but when he does, he takes those wounds, pain and sickness into himself. It takes a lot out of him when he does this and heals shifters so he decided to live apart from most shifter communities. Far away in Alaska, he can be found if he is really needed as a last resort.

Rae was just a cub *small child* when her parents died and she was left all alone. She didn't know who her pack was or if she had any other family. The shifters who found her, took her in and one adopted her into his family as his own daughter. Years later the Guardian of their pack is killed and the Guardian's Sword won't let anyone hold it with the exception of Rae. So when the shifters go out to hold a ceremony in the hopes that the Goddess picks a new Guardian, Rae holds the sword and she is picked as the new Guardian. Only problem is a woman has never been Guardian before and some of the pack don't accept that she was chosen.

Rae is sent away to Alaska to Zander in the hopes that he can teach her how to fight, how to wield the sword and how to be the Guardian. When a shifter died, a Guardian is called to plunge the sword through their heart so the evil fae can't snatch up their spirits and keep them slaves in the afterlife.

While Zander and Rae get off to a somewhat rocky start, they end up understanding one another since they both feel like outcasts. They face some threats, some challenges and in an unexpected twist we find out that the fae might be up to something new and that's not a good thing. We get a glimpse into what might be coming up the next few books and as always we get a look at some of the characters we've come to love. This book is the 9th book in the series and a great addition.