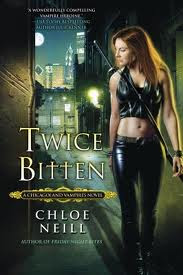 I just want to say that I don't write a lot of book reviews even though I read at least 50 books per month..the reason being I don't think I do as good a job as most other reviewers do at writing them, but after reading certain books I feel the need to share my opinion of books that really left an impression on me. This is one of those times. I should let you know right up front... I did not like this book so this will not be a gushing review..

I read the 1st and 2nd books in this series and while they both had good story lines, the plot was getting a bit thin. The interaction of the characters wasn't all it could be and while it kept me coming back hoping for more from this series..I can see after reading this book that I'm not getting my money's worth at all. I bought the first two books and won this third book in the series. I have to say I'm really glad I didn't have to spend the overpriced amount this book is being sold for only to read it and be disappointed. I'm glad this book was won and not bought because that would make me ever more irritated than I already am.

I've read a lot of reviews for this and so many people love this story..I tried but I just didn't and that being said, this will be the last book in this series I will be reading. I wanted to see more of a romance blossom between Merit and Ethan and while the storyline does develop...when Merit is put in danger Ethan has a freak out sort of emotional melt down and breaks things off with her. I wanted to see their relationship evolve, not be flushed down the toilet. This story needed the evolving relationship of some couple..any couple..just to make the storyline palatable.

The action in this story is good, it really is. But I want more story line than action that lets an author think that character development isn't needed if there's enough drama. I wanted less action and more interaction between the characters and this books just didn't deliver.

I thought I knew where this story was going and thought I would read the synopsis for the 4th and 5th books in this series just in case things do get better. I was shocked at the reviews and after reading some of the reviews with spoilers in them..I am now sure I won't be reading anymore. While I hoped things had gotten better I found the series took a direction I didn't see coming nor that I wanted to read about. I'm not paying these over priced prices for books in a series whose story lines take a turn I don't think any of us saw coming or really wanted to read about.

Save your money and read another series because this one just took a nose dive off a steep cliff.
Posted by Mary Kirkland at 10:07 AM 0 comments