Review: Bound by Shadows (previously published as The Bear Who Loved Me) by Kathy Lyons 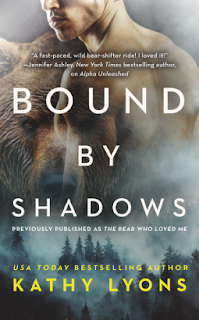 Between singlehandedly running her bakery and raising her teenaged nephew, Becca Weitz thought she had a decent grip on "normal." Then her nephew vanishes, and life as she's known it changes forever. Local legends are true: bear shifters exist . . . and her nephew is part of their clan. As is Carl Carman, the sexy, larger-than-life man who has sworn to find her nephew-and the other young shifters who've gone missing.

As the leader of his clan, Carl is surrounded by enemies. He's learned the hard way that keeping a firm leash on his inner beast is key to survival, though his feelings for Becca test his legendary control. Then danger stalks too close, and Carl realizes he must unleash the raging, primal force within to protect everything he holds dear. But can Becca trust his grizzly side with her life-and her heart?

Becca is raising her nephew and owns a bakery. Things are going alright until her nephew, Theo ends up missing. She melts down a little bit not knowing what to do until Carl walks in her bakery.

Carl is a bear shifter and the leader of his bear clan. He's been watching Theo because he knows the boy is a bear shifter from his clan. So he tries to tell Becca about shifters but she isn't having any of it.

Young shifters are going missing and Carl wants to find out what's happening to them. So when he tells Becca what he is and she doesn't believe him, he still wants to help so he believes he has no other choice but to kidnap her and bring her home so he can show her the truth about him and his clan.

The more time Becca and Carl spend together the more they seem to fall for one another. But Carl is the alpha of his clan and Becca is a human and he knows that she would never fully be accepted as the alpha's mate because of that. Plus he's seen how his brother who can't shift has been treated by everyone and doesn't want Becca to be treated badly.

While they are getting to know one another and getting closer, there's also the search on for the missing kids. When Becca finds herself in danger, I could only hold my breath and hope that Carl found her in time.

This book was a mix of fun, danger, sadness and action as well as a really well done romance. I very much enjoyed this book and can't wait to read the next one.

Disclosure: I was given a free ARC of this book via NetGalley but all thoughts and opinions are my own.
Posted by Mary Kirkland at 12:00 AM 23 comments