Two months ago we heard yelling from across the street and found out that the guy standing there with the police is the manager of that complex and he filed and eviction on two people that live there. He had given them until that (Monday) to move out until the son of the woman decided to start raising hell in their apartment. He was throwing things, yelling, screaming at people in the courtyard and a fight even broke out on my side of the street earlier on Friday. So the manager called the police and said he wanted them out that day (Friday). Which was the day they were supposed to be out anyway, he had just been nice and gave them until Monday before all this happened.

Several police cars showed up and it took several officers banging on their apartment door for the adult son to come out. 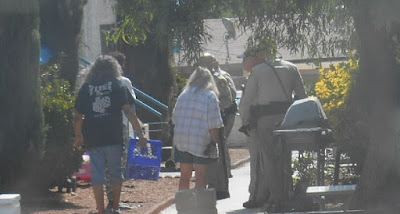 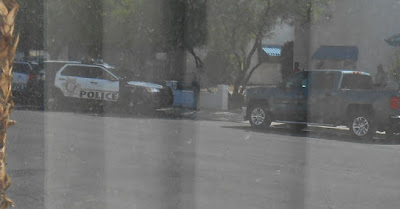 When the son came out, they had him go over by their police car next to the building but that big truck was in the way for me to get a picture of that. 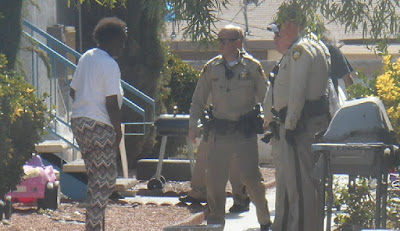 Then the police talked to the mother of that guy who was throwing things in the apartment and a few minutes later we saw some of the residents helping her bring out some bags of hers and put their in their apartment for her. She was locked out of her apartment that day and the manager told her she has 30 days to make arrangements with him to come get the rest of her belongings. That weekend she stayed with the lady that lives 3 doors down from me in my courtyard. Her son left but he was back staying with neighbors. She gets her social security check on the 3rd and she said she'll find a place to rent then (that was 2 months ago). In the mean time, she's staying with the lady who lives 3 doors down from me on and off and with other people other days.

I waited these two months to post this because a lot was going on in that time. That lady told Ken that she gets $4000 a month in retirement and social security but she never has enough to rent an apartment. He wondered why and found out she gambles all her money away so she's been staying with several people around here. She applied for section 8 housing a while back and while she was staying with my neighbor she found out she got it and she found an apartment. So this week she and her adult son moved into her new place. If she doesn't gamble her money away, she'll have more than enough to keep her apartment.

I know some of these pictures are blurry but I was taking them from my bedroom window and the sun was right in our face at the time so that blurred the pictures a bit.

So that's it for this week's Apartment Hell  Life! Be sure to come back next week for more.
Posted by Mary Kirkland at 12:00 AM 48 comments