A to Z Blogging Challenge: P is For Pen Names 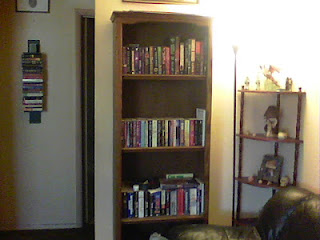 I read quite a bit, I have many books on several bookshelves and when reading as many books as I do it can get confusing when an author writes under 2 or three different pen names.

Here are just a few authors I like that also write under other names...

I realize there are any number of reasons for having a pen name and the one I see the most is that the author wants to write different genres of books for different publisher's and it's easier to do so under a different name.

Another reason is that they have a day job in which their boss and co workers know nothing of their writing persona's and they want to keep it that way.

While I kinda of understand that last reason it also makes me feel like they are ashamed of what they write and don't want their peers to know they write romance or whatever it is they write. I'm probably wrong and they aren't ashamed at all, but that's what it looks like to this outsider.

I thought it was funny that I had been reading two different authors for quite some time and then after a while I went to one of the authors websites and found out...they were the same person writing under different names. It's hard to keep all the different names straight because there are so many authors that do it and just when you think you know what their real name is, you find out that all of their writing is under a pseudonym because they don't want to use their real name.

When I first started writing articles I could have chosen a pen name but I chose to write under my real name. I wanted everyone to know it was me. You can find my articles here.