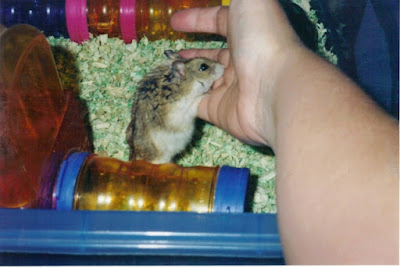 Cuddles. There was a pet store in the mall that was closing and she was the last hamster they had and so I bought her and brought her home. But I didn't know she was pregnant, yeah, she had 5 babies. That was actually fun.
This week I told you I would show you pictures of some of the hamsters we had. I actually didn't plan on having more than one hamster but things happen... 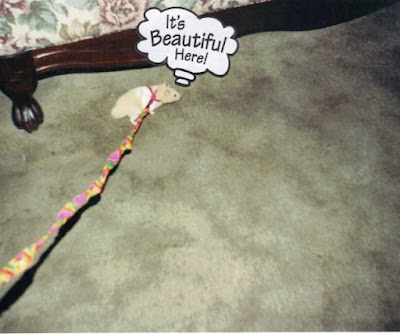 Buster was the first hamster we had. We got buster when one of my daughters friends mother came and asked if I would take him since she didn't want to care for him anymore. So I said yes. He was a really big hamster. Big enough that a ferret harness and leash fit around him and I would put it on him and take him for a walk. I got some looks. 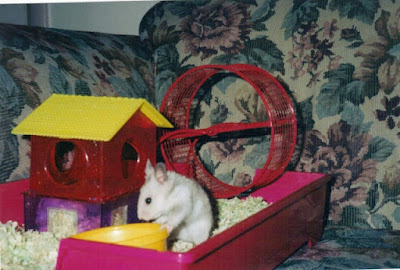 Smokey was a hamster that we only had for a couple of weeks because he passed away soon after we got him. Hamsters have short life spans and sometimes they pass away out of the blue for no apparent reason. 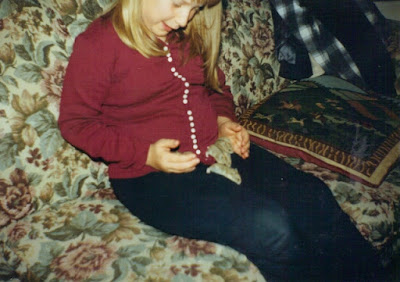 The babies, Cuddles babies. Remember Cuddles from the first picture? These are her babies. She had 5 babies and I kept them all. They were Chinese Dwarf hamsters, about half as big as teddy bear hamsters and really fast. 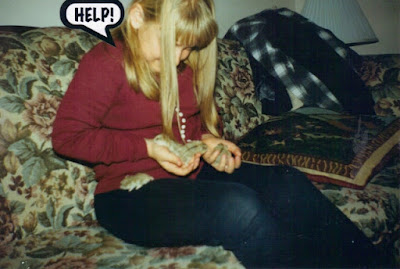 My daughter was trying to hold all of them and they kept escaping. lol They just ran all over really fast. 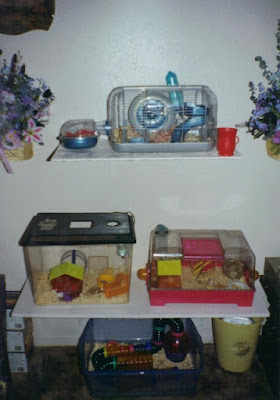 We ended up with so many hamsters that Ken built shelves to hold some of the hamster cages. That bottom one isn't a cage, it's a large tupperware container with a bunch of hamsters toys so I had somewhere to put the hamsters when I cleaned their cages. 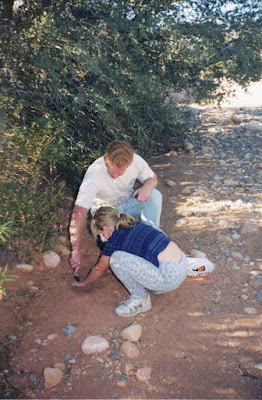 When one of the hamsters would pass away we would drive up to Mount Charleston and bury them up in the mountains somewhere. 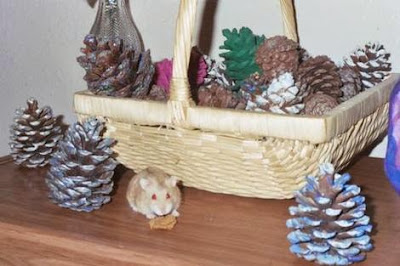 *Chance* Roborovski Hamster. These kinds of hamsters are the smallest and the fastest and they will run! I had to give Chance a little piece of pumpkin pie just to get him to stop so I could get a picture of him. 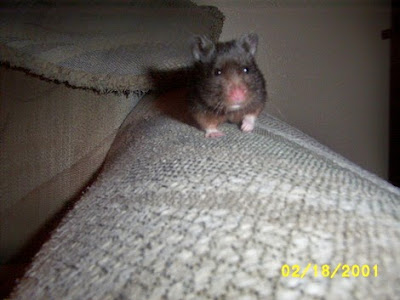 Onyx loved to come out and get a snack. Hamsters aren't as friendly as rats but he was especially friendly. 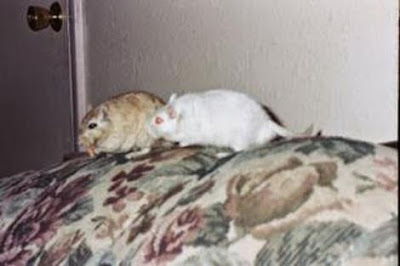 Honey and Spirit the Gerbils. I also had 2 gerbils. That was an experience because they like to hop all over you. I would take them out on the couch with me and they would climb all over me and just hop really fast all over the couch. They were hilarious. 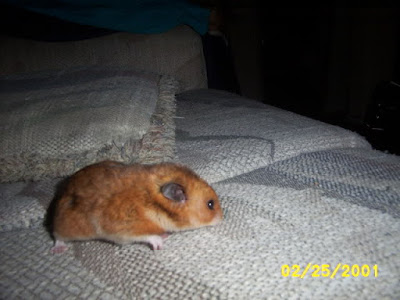 Cinnamon we got when another of my daughters friends didn't want to keep her any longer. When the mothers in my neighborhood found out I would take in unwanted hamsters, they brought me several. lol
Ken found out that if he sniffed really loudly with his face down by some of them they would sniff or squeak back at him. It was so funny. 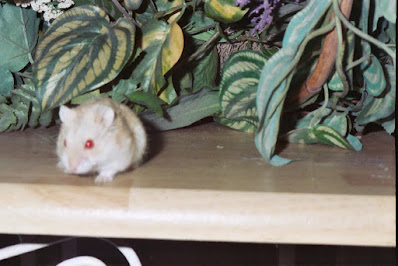 Baby was a Chinese Dwarf hamsters and fast as heck. Hamsters usually only live for 2-3 years but this little guy lived for 4 1/2 years. 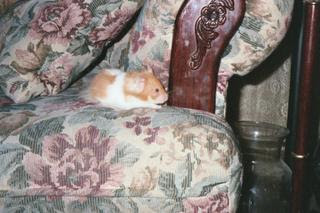 Bambi was one of those hamsters that would would sniff back at Ken. She would run over to his face and rub herself on his jaw and squeak at him. He thought it was so funny and he started doing it to all the hamsters to see if they would respond. 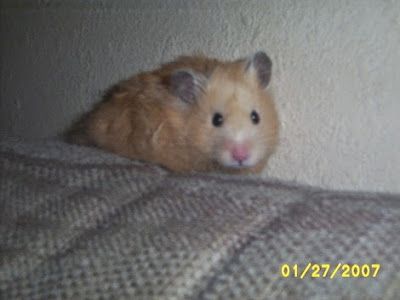 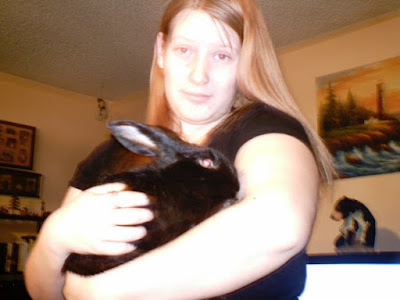 A bunny that Ken found in the parking lot. Ken was talking with a friend in our parking lot and this bunny just came up to him. He picked it up and brought it home. We were going to keep it but my daughter who is holding him in this picture was really allergic to him. So we found him a good home with people who had other rabbits. 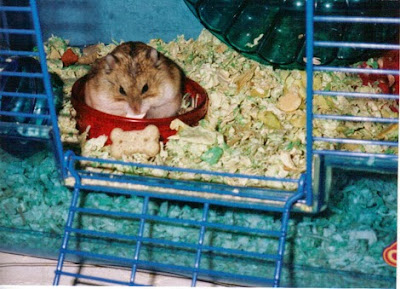 Cuddles. Some Chinese Dwarf hamsters will live together unlike Teddy Bear hamsters who will fight to the death if you house them together. But once she had the babies and they were weaned she wanted nothing to do with them and she would fight them so she got her own cage. She also became a biter and we had to wear thick gloves when we handled her. I have no idea why but I still took her out and let her play on the couch. When she got older she couldn't bite very hard and I didn't have to wear the gloves but she would still try to bite me if I got too close to her. 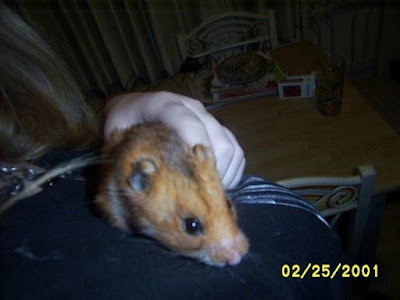 Sniffy was from another of my daughters friends in the neighborhood and Ken would sniff at him and he would run over and rub himself all over Ken while sniffing really loudly back at Ken. We never did figure out why some of them would respond like that to him but Sniffy would run over to Ken and rub himself all over him. It was so cute. He was such a friendly little hamster.
So those were the hamsters that we had before we had rats. I hope you enjoyed seeing their pictures.
Posted by Mary Kirkland at 12:00 AM 48 comments